as in: this single, evanescent,
glance.

it is a sip. sidelong. sunfall.

as in night-comes-gleaming—yes,
the sea its jeweled breast, this

leaning into—arms wide, into. and
taste!—nothing but a starlit wooden boat.

—I’ve seen the deer by the creekbank rise
like wind and flame upward together.

—pine leaves fallen into sweetgrass
by the edge of the barn.

—I didn’t tell you for a long time.
but I knew the sound. broken. unbroken.

—it’s like a map, you said.
the crescent moon. the geese at twilight.

—the shadows of the branches of the trees.
written. and close.

Note: The poem alludes to fragments from Emily Dickinson’s Third ‘Master Letter’; Sappho fragment 102 (translated by Anne Carson), and Shakespeare’s Romeo and Juliet. The phrase “like wind and flame upward together” is taken from Rumi in The Soul of Rumi, A New Collection of Ecstatic Poems, translated by Coleman Barks, Harper Collins, New York, NY, 2001, p. 350. 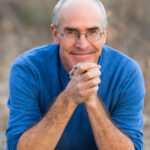 William S. Barnes is a botanist and poet living in New Mexico. He works for the NM State Land Office on climate change and conservation policy. His most recent work has been published in Bangalore, Comstock, Mudfish and Ocotillo Reviews.