The sun set at 3:33 PM. The sky was day until it was a navy dress hemmed with pink and orange. Not hibiscus bright, but gentle like the inside of a seashell.  Then, the hem fell. All of this happened behind me. I drove east that afternoon, bringing my children home to where the sun had already set. Inside our cabin, electric lights illuminated us while the boiler, the fan and the refrigerator reverberated. It was not like the buzz of an insect. It was like living inside a double bass while the bassist pulls their bow over the E string and their bow is long and the musician is steady. Later that night, the nearly full moon rose in the north. As it did, the earth’s shadow moved across its face. It was not like a solar eclipse where darkness replaces the sun. Instead, the earth’s shadow blushed the moon red. It was not like a cherry tomato, it was like the interior of a salmon’s belly. Fleshed, it was no longer the moon, it was an index finger glowing inside a pulse oximeter. I watched from my covered front porch. The propane heater threw out a ring of warmth. Above the heater, the ceiling’s frost melted and fell onto the heater’s cover. The drops landed, hissed, then rose again. The earth, moon and sun continued to move. Earth’s flush slowly withdrew from the moon’s face. It took most of the night to end.

Ghazal for a Future Hometown

Ggugguni heard the Dena’ina sing their only song. He tossed
his eye in the wind, sang di ya du hu, voice bidden anchorage.

My parents met at a Christmas party in Anchorage
Alaska. A story recurses, becomes written anchorage.

Then it was all oil. A strange dinosaur, viscous and brown.
Fate: a body moving bodies for debt-ridden Anchorage.

My reoccurring dream: my home is flooding. Water buries
the stairs, the kitchen. I’m in a canoe but forbidden anchorage.

My mom forms my mouth, teaches it to speak. Say: takahtnu.
Home: a mouth full of brine, cleaved to oil-stricken Anchorage.

In winter, faithful chickadees feather their black hats. Home, my
dad says, is anywhere you hang your hat. A hook, given anchorage.

Qenash Tukda, I am speaking myself into the future, words spilling
like river off a spawning salmon. I would build my children Anchorage. 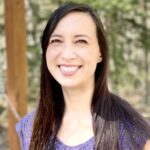 Annie Wenstrup lives in Fairbanks, AK with her husband and children. Currently, she’s a student at Stonecoast, the University of Southern Maine’s low-residency MFA program. Her work has appeared in Entropy and Slaughterhouse Magazine and is forthcoming from After. She was a finalist for the 2020 James Welch Indigenous Poetry Prize.