Aftermath, from Old English,
a second crop of grass grown
after an earlier crop
in the same season
has been harvested.
The house ticks,
dishwasher whirring,
kitchen dark.  A window
rattles, loose in its casing.
We’ve retreated
to our separate rooms.
After the mowing,
something returns:
grasses, meadow,
anthill, hive.

It was someone’s idea to go out to the course
and hit a few rounds of golf. No one
but my father knew how to swing.

We stood in an awkward bunch
and listened to his lesson: stand like this,
hold the club like this, do this with your elbows

and your knees. He moved all parts of himself
in sync, in smooth arcs. I smiled like I
was having fun. My sisters each

took a turn, then my brothers-in-law.
I wanted to do everything he’d showed me,
but my elbows locked, my knees

buckled. The golf ball skittered off
into grasses I could name: switchgrass,
dropseed, Little Bluestem. 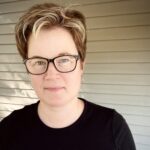 Ann Hudson (she/her) is the author of The Armillary Sphere (Ohio University Press); a chapbook about radium, Glow, has just been released from Next Page Press. Her poems have appeared in Cider Press Review, Orion, Crab Orchard Review, Colorado Review, North American Review, Spoon River Poetry Review, SWWIM, and elsewhere. She is a senior editor for RHINO, and teaches at a Montessori school in Evanston, Illinois.