You are in the second story window of a post-WWII bungalow—you are on an ancient beach ridge—phone pressed to your ear—it’s 20,000 years ago—The Wisconsin Glaciation—you are in the second story window of a world that’s sinking—of a world that’s redistributing its sand—I prefer “storey” to “story,” but you are in the Midwest narrating into your phone so it’s a story where you’ve convinced yourself there is a present—you are talking tonight about the dams along the Tittawabassee in your grandmother’s hometown of Midland, Michigan—you keep splicing proper nouns to a proper noun with commas and pointing to your right hand as though it’s a map and the person on the other end can see the geo-piety of words—it’s a piety you think is earned because of the preponderance of fresh water—when the village of Dearborn merged with Springwells Park and Fordson in 1929, a couple of the proposed names included Dearson and Fordborn—it doesn’t take much rain for the Ecorse River at the end of your street to flood—we’ve been over this before—it doesn’t take much rain for the mallards and wood ducks to atavistically return to ancient beach ridges and ancient lake beds—it’s 90 years ago—you are looking out at Fordson where the boy Henry Ford is dissembling clocks on the workbench in his father’s barn—you’ve written a song called, “Sirens, Heartaches, and Trains”—you say, “I’ll show you what $8,000 will buy, a green bungalow on Burke Street. I’ll show you how to clean the aluminum awning of sludge”—with a toilet brush and toilet bowl cleanser, it turns out—asthmatic pledges in the park after the bars close trouble the tenuous idea of friendship, but every conversation serves a tender purpose—“Nobody talks like that around here,” you warn me—two miles south the Ecorse River is rushing down Parker Street—there’s something beautiful about the phrase “terminal moraine,” something sublime—this is Defiance Moraine—you look into it from a second story Wallside window whose warranty spans lifetimes—if one of your window latches breaks as you go to raise the pane to let the night in, they’ll come to your house and install a new one, even if the now-dead former owner commissioned the job, a phrase you like much better than “bought windows,” and you realize your predilection for certain phrases is taking over this phone call—you realize there’s something epistolary now in a phone call, just as there’s nothing of the now in a letter, even one written in the present tense—you realize it’s 20,000 years ago or16,000 years ago—it’s a span that makes the piss-sallow pane of your window seem brand new—it’s a span that makes your window non-existent—you feel like a lost ball in tall weeds but you are a lost ball in tall phragmites that a seiche is pouring through—you love your voice for speaking this day into existence—you miss the walls of cattails the phragmites crowded out—you miss the passenger pigeons that would blot the sky like grey ink for days each autumn—sometimes a little south of here the leagues come roaring back and the sandhill is what saves us—the high water mark that was the northern shore of an ancient glacial lake—it’s the ridge of Riverside Cemetery—it’s geology, that indifferent pose of the dead that can’t be taught—Lake Lundy, Lake Elkton, Lake Warren, Lake Wayne, Lake Whittlesey, Lake Arkona, Lake Grassmere, all synonyms for what we now call Erie—a bed of dolomite formed of the bones of prehistoric vertebrates— quagga mussels strain the water of Gibraltar Bay, yet lyngbya clogs the delta—decades ago, an environmental group convinced Dr. Seuss to remove Lake Erie references from future editions of The Lorax—they were optimistic that the lake’s eutrophic period was behind it—it’s 13,000 years ago and the Niagara River has just begun to carve out its bed, pulling the lakeshore down to the southeast—it’s the Saturday night of the Telegraph Cruise and you are lit in a little window, a quarter-roundel that puts the outline of a tear to asphalt—on Burke a woman shrieks at a child and the dog that was euthanized for biting the mailman still growls in a low bass register like the vomitous ego of a passing car—it’s the big block V8 454 cubic inch 345 bhp of a ’72 Impala whose muffler’s been unbolted—it’s loud as hell, it’s liquored palaver, a terminal moraine where the screeching of a custom coupe’s a relict—

Note: This poem owes a debt to Mason Christensen’s essay, “How Ancient Beach Ridges Helped Create Modern Dearborn,” which appeared in the winter 2019 issue of The Dearborn Historian. 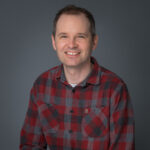 Cal Freeman is the author of the books Fight Songs (Eyewear, 2017) and Poolside at the Dearborn Inn (R&R Press, 2022). His writing has appeared in many journals including The Oxford-American, River Styx, Southword, Passages North, and Hippocampus. He currently serves as Writer-In-Residence with Inside Out Literary Arts Detroit and teaches at Oakland University.