It was a story about a man who drifts
through his life, not feeling deeply, even when
he returns home to find his wife atop his friend.
It was about exiting silently—from the room, his job,
that particular life. I was on the subway, bent over
the page, aware of the sudden presence of a man
clutching the overhead bar. He was a giant
presence engulfing me like a Redwood,
but I didn’t look up, eyes fixed only on the words.

It was a story I’d never read, but somehow knew.
At my stop, I hovered near the station wall
in dreary light, reading without glasses,
but seeing clearly. The man found a new life
in a side-street bar he opened where jazz ruled.
There was a woman who revealed
her bruises in his upstairs room, then pretended
not to know him, and the mystery of the silent man
who sat for hours, reading. Then snakes appeared,
and then more, encircling his place.

I didn’t look up when the platform exit-cage
spun violently—each passenger spewing
forth from his tiny cage-within-a-cage. More snakes
appear: the mysterious customer commands the man
to close and move from city to city, mailing back blank
postcards. He obeys. Something unnamed follows him
to a cheap hotel, where he hunkers down to watch TV
and read the faces of office workers across the way.

There is a knocking on his door in the night;
a day later, a knocking outside his window
ten flights up. I may be late for where I’m headed.
Now more people are turning the cage, leaving the cage—
a whirring, human blur. I stay bent
over the page even when the words begin to merge:
This is a story I know. 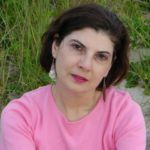 Maria Terrone is the author of the poetry collections Eye to Eye (Bordighera Press, 2014); A Secret Room in Fall (McGovern Prize, Ashland Poetry Press) and The Bodies We Were Loaned (The Word Works), as well as a chapbook, American Gothic, Take 2. Her work, which has been published in French and Farsi, has appeared in magazines including Poetry, Ploughshares, The Hudson Review, and Poetry International and in more than 25 anthologies. www.mariaterrone.com