In all shapes a found secret, voice of obscure wind

While in the road I stood, a girl bore a limb

Of horns on her head & I laughed aloud

Vulgar joy, languid by its own weight,

At times the world is too much with us

Reproach from former years, whose power may spur me on

How the sea throws off the evening shade

How that which each man lived

his particular, dies with him or is changed

At the first, a promise to share the fireflies in your brain with

the crickets in my brain, gift the heart-shaped apricot at my

end for your bunspark unpuckered, your stalk of young maple in the gorge

of the river you brought with you. Reach your hand in this fashion.

The discovery of how to really bite dark cherries. Swollen bordercall into me into yourself

They’re spun from their beds and they are comprehended. I know you are

only, no matter how we relish this thing we do. Look at us, our radiant cooling. Relinquish your

clothes. I’ll cut you mine.

The acrostic in “Haute Couture” is a quote from Alexander McQueen. This poem was influenced by the interview Alexander McQueen gave Nick Knight in 2010, SHOWstudio: Alexander McQueen, S/S 2010 RTW, Plato’s Atlantis Interview on Vimeo, especially beginning 11:26 about servicing women’s bodies, and as a gay man how he related to women through touch and with their minds. 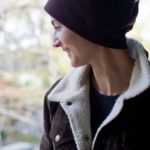 Valerie Wallace was born in California and lives in Chicago. She earned her MFA in creative writing from the School of the Art Institute of Chicago, and is an editor at RHINO and on the advisory board of the Afghan Women’s Writing Project. She was selected for the Atty Award by Margaret Atwood and has received an Illinois Arts Council Literary Award and the San Miguel de Allende Writers Conference Poetry Award. Her chapbook The Dictators’ Guide to Good Housekeeping is available from dancing girl press.