A family picture in a frame is propped
upon the baseboard, having rocked off its nail
and come to rest in an upright lean; three smiles
are yellowed with vintage dust and six young eyes
are glazed nine years over with cigarette grease.
A dashing soap stud philanders through the scene—
finesses the furniture, bangs at the door,
and scalds the flat screen that he swanks behind.
At first it doesn’t trip the eye, crinkled there
amid the high-lumen refulgent hinterland,
the teeth-torn blister-packs, sinister as brawn.

In the Living Room

Three cased figurines, each one a Gabriel,
have laid, clinquant-like, upon their shoulders of
porcelain, mother-of-pearl, ivory,
in a mail of mildewed eyes, a dolor much
too precious to confess, that of witnessing
a wax, a wane; so thus they don in accord
a permanent remiss of unblinked eyelids.
The carpet, dense and soft, vinegar scented
almost, almost wet, too, blintz-colored and cool,
is like a rag inundated with gagged hymns.
This nacre teemed shrine-hold seeps with squalor; squish.

Cardboard in the trash, a pregnancy test box,
speaks its mind: Easy to Use, Easy to Read.
Inexpensive was, to be sure of that, this
dire tryst with capitalism, with mankind.
An empty glass is set upright in the floor.
A sample cup and wand are boating around
the unflushed toilet bowl ringed with iron scum.
The stench of sour urine prevails upon
The undefiled sinuses and drives a skunk
of grim, clandestine desire reluctantly
through foul intellection—like grunge grubbed on grout.

In the Dining Room

Consanguineously spun, and clustered thick,
tinsel-like through darkened nook and niche, necklaced
wall to corner, from threshold to crown-molding,
are cobwebs which conceal under finespun silk
a concupiscence, an initiative to
usurp the absconded princessdom at dusk.
A cheap mock chandelier, incandescent like
a bruise, emits painlessly no light to glare
the shadowy dinner table, strewn with bank
receipts, clinical sample packets, the cards
of chauvinists, named and dated like paychecks.

Author’s Note: The constraint I deploy here, a conceit perhaps, operates three-fold:  (1) the subject of being bound indifferently to the scene reinforces the regular use of the (2) 11-syllable line and 11-line stanza, in which the letter combination (3) “in” shifts incrementally, one point of emphasis per line, moving from the terminal position to the initial, in order, across 11 linked poems, which is all to speak to the ghostly bondage of iambic pentameter. The impetus for the device was the combination of studying Elizabeth Bishop’s “The Map” and hearing the Grateful Dead song “The Eleven.” 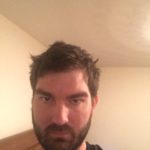