At the end of the road the old mining ruins are being slowly, steadily swallowed by the forest. Buildings that once housed hundreds of miners, their swimming pools, billiard tables and movie theater, are now mere concrete shells, some bearing small trees on remaining slabs of roof. Casual hikers who don’t stop to read interpretive signs likely won’t recognize the scope of the forest’s accomplishment. During the mine’s heyday no one could imagine it would soon crumble into green. Erased by time, the biggest hard rock mining operation of its era was disappearing with a whimper less than one hundred years after opening. Forests understand decades, they understand centuries. Gold changed the history of this land, but in some ways that era was nothing but a flash in the pan.

Hardly a day goes by when someone doesn’t take some comfort here. In a fit of despair, a great image of “time heals all” is a friend indeed. Just taking a walk in the woods isn’t always as simple as it seems. Knots of anxiety are loosened by a source we can’t quite name, something related to the force that reclaimed this damaged land inch by inch, slab by slab, the strength to keep moving ahead, slow but steady, confident, humble, unwavering, until eventually, against all odds, a passable equilibrium has reappeared. Lingering worries about money or mistakes grow a thicker skin and the parking lot does not look so bad upon return. Measuring our lives against something longer, a steadier stream of existence, is a good use of time. Nature. Of all the things humans can’t live without, perhaps she is the most neglected. Patiently, she waits for us to notice, or at least to be done with our business, and, like the mine owners, move on. Quietly, the forest has completed the demolition. Rails left from ore cars are bent into abstract sculpture.

Summer brings cruise ships full of methodical travellers and adventure seekers. Tourists fill every nook and cranny of the town as they hurry to get their money’s worth. Under the ten p.m. sun they’re still looking for bears, whales, something thrilling to mark their time here. Visitors riding in an ATV cross the trails by the old mine too quickly to glean its story. Watching for the jumping off point of their next adrenalin rush, they pass through the second-growth Sitka spruce never guessing the scene it supplanted. Xtratuffs (rubber boots of choice for locals) plod through mud puddles while visitors, mistaking speed for drama, pursue an endless quest. Yet even the snail’s pace and geologic time quiver with harrowing tension. Ziplines misconstrue time, blurring the details of the forest’s reprise and shielding the travelers from a lesson that might change their course.

Author’s Note: The first sentence begins with “a”, the second with “b”, etc. 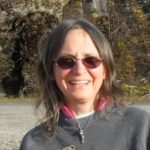 Jenny McBride‘s writing has appeared in The California Quarterly, Green Social Thought, Aldebaran, and other journals.  She makes her home in southeast Alaska.