Of her mother’s body, gasps in

Open to catch her, channel her to safety,

Rock her as the mother’s body turns on itself,

Eclamptic. Her name bestowed on her in a 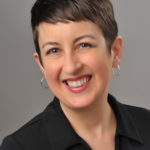 Bernadette Geyer is the author of The Scabbard of Her Throat (The Word Works, 2013) and editor of My Cruel Invention: A Contemporary Poetry Anthology (Meerkat Press, 2015). Her poems and translations have appeared in Asymptote, Fourteen Hills, Oxford American, Poet Lore, and elsewhere. Geyer works as a writer, editor, and translator in Berlin, Germany.