Neon Pumpkin? Marmalade? Tiger stripe? What strange shade was it?

Not me, then, when I didn’t watch TV. Not me even now, a thousand cop shows hence, did I know that fingerprint powder was the color of sun-dried apricots scattered behind crime scene tape, bright yellow DO NOT CROSS. 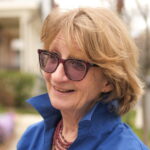