I Have Watched Toxic Men

I have watched toxic men in the dark of an old theater and felt what Lorca called Duende and what my therapist calls displacement.

I have watched toxic men undone in a paper bag, eyes luminous as mollusks, cacophonous clams.

I watched toxic men watching their own movies.

I have watched them unfold their genitals like unformed vowels and slowly stroke them into being.

I watched toxic men every afternoon one winter when my heart was the wrong end of a violin, candescent as a beetle rotisseried under a heat lamp or souvenir off-gassing in a mini-mart.

I watched them as a comet, ellipsis, a glow-in-the-dark word for every ugly feeling.

I watched them while dissociating, brought back to my body the way a cicada might crawl into its abandoned husk.

One spring I did not watch them and my husband and I saw The Apu Trilogy at Film Forum.

It was the month before I got pregnant and I remember walking up subway steps,
white blossoms bursting out of cherry trees, innocent and obscene.

I don’t know why I’m thinking about it now except it was a time when my body briefly belonged to me and I could squander it:

the solitude of an almost spring afternoon spent inside a theater, could absorb
the crackled radiance of Satyajit Ray

then walk back out into the world holding my love’s hand as if sauntering through an extended hum;

gush and séance, everything holy splayed out like a word fallen from god’s mouth, suddenly without purpose and seen.

I Listen to George Harrison’s “Apple Scruffs” After My Miscarriage

the glissando of the harmonica part so much like counting backwards,
autumn light erupting in blisters,

but when I woke could feel the wadded suture of my tongue,
heard myself croon, was I your best patient ever

because didn’t I want to have succeeded at something, even if only hiding my suffering,
how the first day I went about my business bleeding into a winged pad

pulsating with contractions, the harmonica part like something opening
at the glossy hinges what can’t be folded

into my vein, secreting glyphs of narcotics
before going home groggy and emptied

and didn’t I know I would carry this with me for the rest of my life
and that it is good, the way an injury is said to work labor into the worker’s body,

Stoic and stately bouncer of the world’s smallest
strip club, I am delighted every time I pull you out

like a Sunkist can from a creek
so I can say good morning to my husband,

delighted my teeth survived the night
cloaked in their velvet slurry

on the roof of his mouth even though,
let’s be honest, we are middle-aged

pumpkin, back when we could watch a matinee
directly after, still wet with 11 am, a giant cup of soda

sweating between us under the glow
of Liam Neeson, surly as a saint

or Tom Hanks cowering in his ship,
waiting for that perfect line (say it with me)—

pay off his alimony, Liam Neeson
hovering above us like a renaissance angel,

to when we could sit in the dark sipping
collective air—

Oh guardian of syllables, flash dancer in the supermarket aisle
of anxiety where the only things left are musky bottles of Mountain Dew—

I used to love rest stops, the constellations of key chains,
lighters with zodiac signs, and silk-screened wolves, oh the wolves—

Did I start grinding my teeth then when the world first signaled its descent,
the two halves of my body swing dancing

as if pressure might crown a spark, my mouth a parking attendant
in God’s strip mall holding her citations

and spitting out a star—
Lord, I want to taste everything now that oranges are hard to come by,

want to know what my husband feels as his mouth circles the perimeter
of an ice cream sandwich, his teeth glimmering

steadily grinding against itself—the way
anything is ever born, Liam Neeson

struggling through a movie
so bad it becomes the only one I want to remember.

turquoise kettle whispering obscenities
to the crooked sieve of herbs

All I want is Joni Mitchell singing
All I really, really want

I want our house to be the geode
in Joni’s voice, both opaque and translucent

cracks over suburban streets
how when I pull broken glass

from the flower beds
before planting Pink Wave petunias

and isn’t mothering at the end of the world
like this, cutting your hands open

on the trash-woven soil
before making it bloom,

dreaming in the backseat,
while you weep quietly, humming

along to your favorite song. 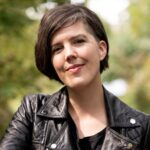 Kendra DeColo is the author of three poetry collections, I Am Not Trying to Hide My Hungers From the World, My Dinner with Ron Jeremy, and Thieves in the Afterlife, selected by Yusef Komunyakaa for the 2013 Saturnalia Books Poetry Prize. She is also co-author of Low Budget Movie, a collaborative chapbook written with Tyler Mills. She lives in Nashville, Tennessee.