Ode to the longest ocean pier on the west coast

In the gutted fish-light of early morning, of anglers
casting their lines out to a cold, crushed sea of kelp
waving under a shuttered bistro floating a phrase,
walking on water, on its marquee, I count streets
sloping down to the bluffs, eight named for cities
and forests: santa monica, saratoga, cape may,
long branch avenue, muir and lotus, sunset cliffs,
then a boulevard, east to west. Three nights ago,
you said, a car spun off into the darkness of the pier –
fixed last year with city funds – hit two pedestrians
before spinning into the streets again. Intoxication.
Why else would a person drive right onto the wharf?
Who would execute such a brutal plan, then smile
with a blissful look on his face, as bystanders said?
Why does our world birth equal parts recklessness
and harm? Couldn’t God hold us in a starry hand,
soothe us with salves of mystical glue, heal us
instantaneously, our lives ineluctably scarred
by misadventures? You ask frankly whether
I should continue spending time with you
while you’re taking me to dangerous places –
two bystanders in a ruthless, dangerous world
rife with toxic, unholy places riddled by risk.
We wonder if some places are safer than others,
or is this a fear of losing oneself utterly in a soul
of another, where one can’t find a way back
from the stairless fathoms without a loyal torch
to light the way? In other words, if we abandon
ourselves to ourselves without stepping out
on the endless waves of a beatific design
beyond charted waters, we must especially
pray we must know it, if we truly want it.

Ode to the forgotten poem

I left it tabled with the hrudka egg cheese,
a fat slice of the moon on the cutting board,
did not take it with us in a war emergency.
I left it with small potatoes boiling, never
buttered in their scrubbed, red jackets, steaming
by blushing vineyard wine, a housewarming gift
from your first cousin. Saltless is how you left
the sheep’s milk said to be forgotten, but in fact
it is cherished because of its seasoned revelation
like preserved meat displayed on a charcuterie,
gleaming and rubicund with their pungent spices
of peppercorn, unspoken vinegar, and smoke
rising from villages where people fled, refugees
from the war. The tender blade of truth knifing,
bodily gutting, comes to light, preserves the hours
with wafer-thin, fat salo and spicy horseradish,
cubed sausage and beet sauce, figs with a profusion
of seeds hitting the back of your teeth. Or the cheese
of death whose thick flesh cannot bleed, congealed
on the cutting board like a casualty. An aged poem
is the cheese we ate daily, blue morsels of goodness
we once tasted for dinner or on Sabbath afternoons—
now it is the intractable worm of hunger devouring
the wound of human essence from within to without.
We ate the color of honeycombs aged in wheels,
the soft wedges pared with a knife, the mild
melody of rennet under the rinds, their stanzas
of delectable, silky grief and sour milk.

Ode to the red onion blossom

In the fog of war, I learn how to make red onion hearts—
you must hold the peeled red onion in your hand like this,
place it on the cutting board like a tilted, roundish red pear,
not an onion. Cut it open with a knife and turn it clockwise,
paring again and again. Drizzle with extra virgin olive oil,
balsamic vinegar, and a pinch of salt. Roast it as you would
any old root vegetable in the oven. Tease it open gently—
the red onion softens into a lotus blossom. Aorta parted
wide, her valves exposed to the air, this is your heart—
see what the war has done, split you asunder? You close
the heart with a fork and put it back in the oven in tears.
How can you heal this steaming wound, the layered flesh
birthed and bleeding with nightmares, the wounds of war
and beauty gasping all at once like a drowning arabesque,
the sleep apnea of a somnambulant dancer in the mist,
dreaming of a world where a blossom must go on pointe
and perish with abandon, then rise again to save our lives? 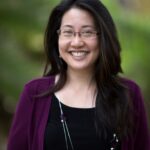