The question of how many angels
can dance on the head of a pin
may be answered by the beetle
whose thorax the pin has been
skewered through, slightly off-center
to the right.

Listen for its answer carefully,
as the beetle is under glass.
And also dead. Do not lift the glass
or the angels will get away,
making it difficult for the dead
insect to reckon them.

Do not think of my sadness as rebuke.
Both beetles and angels are winged things.
But look at the beetle’s hard shell,
its iridescent dazzling—not, as you
might suppose, a strategy for mating—
but camouflage. 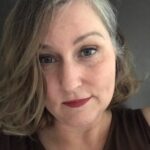