—to peer like a haruspex
into their broken bodies for the trap doors
where their souls dropped out.

Once, after a two-year absence, I watched her
inspect her estranged father the same way.

When he arrived, she was precise in her affection.
She was exact in her sorrow when he left.

My longing on her behalf is full of salt.
I could wring it out and make an estuary
where sandpipers and egrets gorge on small gray fish.

If I were to tell the truth here,
I would say I resent how vulnerable I am to her
measurements and her calculations. Before her

I, too, could determine how much to love
and when. Now I round out my days
watching her leave through the doorway
with her breakable bones and delicate membranes,
worry caged like a house finch in my throat. 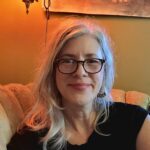 Allisa Cherry was raised in an irradiated desert in the southwestern United States before relocating to the Pacific Northwest where she received her MFA from Pacific University. Her work has received Pushcart and Best of the Net nominations and can be found in High Desert Journal, the Westchester Review, and at SWWIM Daily, and is forthcoming at The Columbia Review.