You didn’t decide to become a clown. You realized you already were one, you told us over an overflowing bowl of Cheerios one midnight. That morning you flagged down each car on our street that passed, waving a handkerchief and smiling widely, which should have been a sign. We asked if instead you wanted to be a stand-up comedian, but you said you had no use for words. You wanted exaggerated movements, pantomime, and sometimes to bully. We suggested improv or mime. But no, you wanted kaleidoscopic color, outrageous disguise, zeal that was larger than you or anyone else could contain. Why not start with seasonal clowning? Harlequin for Mardi Gras? Jester for a Renaissance Faire? Becoming a clown, you said, was all you ever wanted to do. As if to show us how little we knew, you picked up a couch pillow and hit yourself over the head three times. The next day a small circus really did come to town. Gleeful, you crowned yourself with a rainbow wig, slipped into your Carhartt overalls without a shirt underneath, and yanked on some fishing waders from the garage. We held your arm at the door. You pulled it away, saluted, then made a heart shape with your palms around your chest. You cried exaggerated tears, still smiling. When you left, we followed. After a few blocks, you dropped your wig in the street. Underneath the streetlamp, it looked like rainbow roadkill. We picked it up and brought it home. We’ll have it for you when you return. 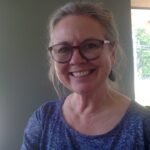 Theresa Coty O’Neil has had fiction and poetry published in Alaska Quarterly Review, Connecticut Review, Gravel, MacQueen’s Quinterly, and others. As a freelance writer, she has published articles, reviews and columns in regional and international publications. She lives in Kalamazoo, Michigan, USA.