I was alone on the island where monks invented an iridescent yellowish-green liqueur and named it Chartreuse after the mountain range in the distance.

On another outcropping of monastery brothers concocted verdigris ink by submerging copper in wine. They wanted to achieve the leafiest possible light. Is it even you I miss under these dim fluorescents reflected back in such emerald ink?

A redwood tree will live for a thousand years; a banana slug will last seven, at most.

In the lab, the slugs eat any sapling the researchers offer, except the redwood. They eat cardboard, but not redwood. They are revolted by redwood maybe, or in awe of it. I doubt the trees think very much about the slugs who let them grow so tall, though it is becoming clear to me who the gods of this evergreen sky really are.

Covered in an extraordinary mucous, they ooze on the single foot of their bodies. After they mate in their hermaphroditic fashion, they eat other’s penises in order to detach.

I am reminded of Aristophanes’ description of perfect human love in Plato’s Symposium: Soulmates live eternally connected, cartwheeling their synchronized way through life. He said it like a joke about how impossible our ideals are.

All the other drunk philosophers laughed too, then concluded with great seriousness and sincerity that love is an orb, a kind of planet, floating through some other dimension but casting its shadow on us.

When I watch them I become as slow in my gaze as they are. How tender it must be to let go of each other by feeding each other. How much the touch of my own eyes are the selfsame squish and slime of slugs on a bough.

You belong to some other planet. These beautiful disgusting ellipsoid beasts are here, with me.

Epithalamiums Are a Bullshit Poetic Form of Wedding Toast All Full of Lies about What Life and Love Are Supposed to Be, I’ve Had It with Lies, Here, I’ll Tell You the Truth Instead, a Gift, I Hope

I want to begin by telling you of these tiny frogs called microhelids who live beneath the legs and in the nests of huge tarantulas. Not because they relate to this occasion except that I was thinking about them all the time in this year when you were getting married.

Like a frog I am here like you or any of us because of how I wefted and warped a kind of evolution inside this all-together nest I like even as I don’t. There are tarantula mites and the frogs grow fat eating these. If they didn’t, the mites would eat the spider’s eggs. The spider could eat the frogs but it doesn’t. This is a choice, but one more easily made without regret because of how the frogs secrete a toxin that makes their skin taste vile to a spider. They love each other, frog and tarantula, like people who need each other do.

Like a tarantula maybe, or a frog, or a mite, it is hard to see your place in the system from within it. Like you I bring my legal pad to the working lunches, file the report, explain to a man how I make less than him despite having accomplished more, explain to another I am neither complimented nor amused to be called a girl, notice the women who are not white like me making less than all of us, remember money is a symbol as much as a cut flower or a ring. I try to figure out how to take power and give up power at the same time, and love too somewhere in this, I heard is the only way forward.

Of course none of us is a frog and none a spider. None of what we do is eggs or mites or nest. They are not symbols, only themselves. In that way too we are like them.

You and I were talking of dresses across 500 miles, scrolling pictures of this blue or that one, while my daughter, your niece, our dear, pulled a frog from every stoop and bush in the town square. This happens sometimes – there are a few days each season when all the young of a particular species emerge leaping at once. In general, humans miss it, the slick abundance often too small or vast, time fleeting, our eyes on door handles and not the broken places in concrete.

But sometimes we don’t miss the moment, we are there and we see it. As I have seen over and again on this wedding day, like frog upon frog, how tenderly John can look at you. Outside it is another flood year. Frogs are the uncountable millions, birds in decline by a third this decade alone. There are lifetimes in those looks. I wonder who else at this banquet hates themselves, their dress, their flute of champagne for how their comfort is tied to the picture in this morning’s news or yesterday’s of someone’s weeping child.

The tarantula’s name can be translated as “the velvet brush.” Though they live in burrows in the ground, they still weave silken webs for mating. I find it strange, the occasions that bring us together, the ones that do not. But the way you sometimes reach for his hand, that is easy to understand.

Sister, the truth is that I will love you all our lives. It may seem as if you have taken his name – you know I wished you wouldn’t because you told me to shut up about it and I will presently – but always no matter what, you are one of us and I am one of you. All around frogs are feasting, spiders are hatching, there are children out there laughing to hold them all, tiny treasures, in their cupped palms, let us not miss the moment.

On the Green Line

Like a lot of people, I don’t always know how to ask for help, so I offer it to someone else instead.

Though I hardly even drive anymore in this new city, I keep glue traps in my car because I like the way it feels to hope I might again see the woman who was so upset about spiders in her bedroom. She seemed to be hallucinating, but I once had a spider infestation in my home and I woke up every morning welted, itchy, and freaking out. Wouldn’t it be nice to see someone I once shared an hour with and be able to say Look, I heard you and I found a way to help.

Mycorrhizae spores form vast underground networks, to sip at the simple sugars photosynthesized down through the roots, and in so doing connect trees, who then share their resources within and across species. Douglas firs and paper birches shuttle carbon back and forth seasonally, with birch giving most generously in the summer when their canopy covers the forest and firs returning the favor in winter when they have all the light and more.

Yesterday on the green line, a young woman was having the most distressing high I have ever seen. She was so fast, her head and her hands, her voice a kind of song in a sharp key. It hurt to look very long at her arms.

I was coming from a meeting about what will happen next to a person I have cared about. The agenda included a pamphlet for me about orders of protection and forms to erase my home address from all public records. I have not decided what I will do next, but yesterday I decided to be one of the people who carefully and consciously never makes eye contact with a person in a precarious position.

Not forever. I hope this is not what I am forever.

The artist Jenny Holzer once rented a huge marquee so she could stand on a ladder and slide black letters into illuminated rows: It is in your self-interest to find a way to be very tender. Sometimes when the train blurs past, I think for a moment that is what these billboards are saying.

Mushrooms are such beautiful and elegant reproductive structures of a much larger subterranean being called fungi. When they emerge as ripe bodies after a rain, it is a consequence of how full the forest is with vitality and a green light filtering through the leaves into the fungal loam. Wouldn’t it be nice if we could see some right now? If there were a crack in this concrete and some haymower or puffball or shaggy ink cap pushed through the tender dome of its head just to see how things are out here in the air? 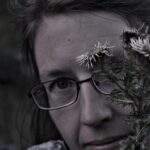 Kathryn Nuernberger’s poetry collections are, RUE, The End of Pink, and Rag & Bone. Her essay collection is Brief Interviews with the Romantic Past. The Witch of Eye, essays about witches and witch trials, is forthcoming in 2021. A recipient of the James Laughlin Prize and an NEA fellowship, she teaches in the MFA program at University of Minnesota.