ol’ wayne lee had a wild hog trained to eat out his hand an’ bathe in muddy orange groves an’ the two cooed like mourning doves / pa scared it through barbed wire / i shot it dead with a .410 slug / wayne saw / full grown man cried through scraggle beard / an’ i never seen pa so shamed

cryptids of the southern wastes

daddy left for work and never came back
ma said.

brother heard tell that he freighthopping in chicago from a woman he pays
but she’ll drown a cat for a dollar and she told me all men feel the same with her eyes shut
and she don’t believe in stars, says they just birdshot that forgot to fall down.

preacher told me that pa’s just lost and one day the sun’ll shine like it never did and we will all be healed
and he walked off with blue movies in hand and his hat pulled low.

uncle said that pa’s nowhere but if i cry at night he’ll come back and get real mad and hit me good for raisin’ hell. says if i squint i might see pa in corners of dark rooms since he swore off sunlight and got tired of people and chose to live as an owl.

but i seen him hanging from the oak tree since november last
i hear his bones click clacking like chimes when the north wind blows
so i know he loves to dance,
and on new moons i hear him say he loves me like i can’t believe
and i know i know i know
he comin’ home. 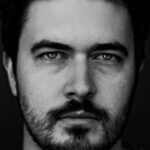 David van den Berg grew up in the Florida swamps. He is the founder of Prometheus Dreaming Literary Journal. His poetry appears in Cathexis Northwest Press, The Blue Mountain Review, Waxing and Waning, Castabout Arts and Literature, From Whispers to Roars, and Forbidden Peaks Press. His chapbook Love Letters from an Arsonist was a finalist in the 2020 Kallisto Gaia Press Chapbook Competition.