I retired to my room and opened up my sock drawer. I kept a little bit of cigarette cellophane at the bottom of the drawer as a container for the stash of pills I kept to even myself out, the secret stuff I couldn’t share. I took out 600 mg of gabapentin, and 30 mg of Roxi. Snorting gabapentin gave me nosebleeds so I took that orally, and snorted the Roxi with a straw. I didn’t snort pills using dollar bills any longer because I was very broke, and once a Burger King cashier refused to take my dollar because of the white dust on it. I was so angry at him, embarrassed. Too low even for Burger King. I went back to my car, and after it wouldn’t start, I scraped the residue off the bill with my key and bumped it before calling for a jump.

I pulled out my computer. I had not had internet for almost five years, and having recently acquired it, I found Youtube to be bottomless: sublime and grotesque. Any interest could be followed to an illogical and perfunctory end. When I think of how Youtube works in our lives, I think of my friend, who is very codependent and was scared to break up with his girlfriend. Their relationship was a stale bagel, empty and with a hole in the middle, and through a Youtube relationship advice feed they concluded the best course of action was opening their relationship. A few nights later there was a blizzard that knocked out power in the city, and by candlelight him and his girlfriend had awkward group sex with some other of our friends. Horrified by the irresponsibility and foolishness of his choice, my friend ran from the scene, hopped into his gold minivan weighted down with newspapers he was supposed to deliver for rent money, and promptly drove his gold minivan over icy roads, and into a ditch. I think of this when I think of Youtube because the video only had a few thousand views, and was years old. It was a scream into the void most likely even forgotten by the screamer. But it put my friend in a ditch.

The scream into the void that acted as my personal siren song was a guy named Shoenice, who had a channel dedicated to eating disgusting things in great quantity. Tube of toothpaste, container not included? Give him 30 seconds. All gone. Sam’s Club-sized jar of mayonnaise. 90 seconds and he may even gag a little bit. Once a week, per fan request, he chugged a bottle of whatever liquor was most requested. He would do a fifth or a half gallon. He chugged it in a single breath, his Adam’s apple heaving up and down. After chugging the bottle he normally let the video run for a few minutes more, doddling on about whatever he had been discussing before; anything from microwave meals, to baseball, to the weather. In those few minutes the video showed the licking beginnings of whatever kind of hellish drunkenness awaited him. His lips stayed apart longer, his eyes spun open, seemingly getting farther apart on his head. He burped and hiccuped often, massaging his throat with the web of his hand between his index finger and thumb, almost like he might start to choke himself any minute. He ended every video by saying, “Shoenice out”. The ones where he chugged liquor, the “Shoenice out” signoff was slurred, and thick tongued. I never wanted the videos to end. What does a man with empty walls do after he chugs a fifth of fireball?

Go even deeper in the oeuvre of Shoenice and it comes out exactly how and why he can do this. No one develops such a skill by luck, or chance. I hoped it was not a natural gift. Shoenice had an abusive alcoholic for a mother, and as a young boy, to cope with her mania and violence he would hide behind the curtains in his room and ingest whatever he could to soothe his pounding little heart. The first thing he ate was a Three Musketeers bar, wrapper and all. In the video where he talks about his ability, he does not seem ashamed. He seems perfunctory and bottomless. What else could he do? Have you ever tried to escape your own mother?

Go on Youtube and search Shoenice. You can see him eat an autumn leaf. He’ll swallow a whole summer sausage. He’ll get a tattoo of your choosing for $1000. 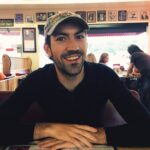 Sam Bickford is from North Carolina, and currently working on an MFA at Louisiana State University. He loves bicycles and cats.