An Interview with Alicia Jo Rabins 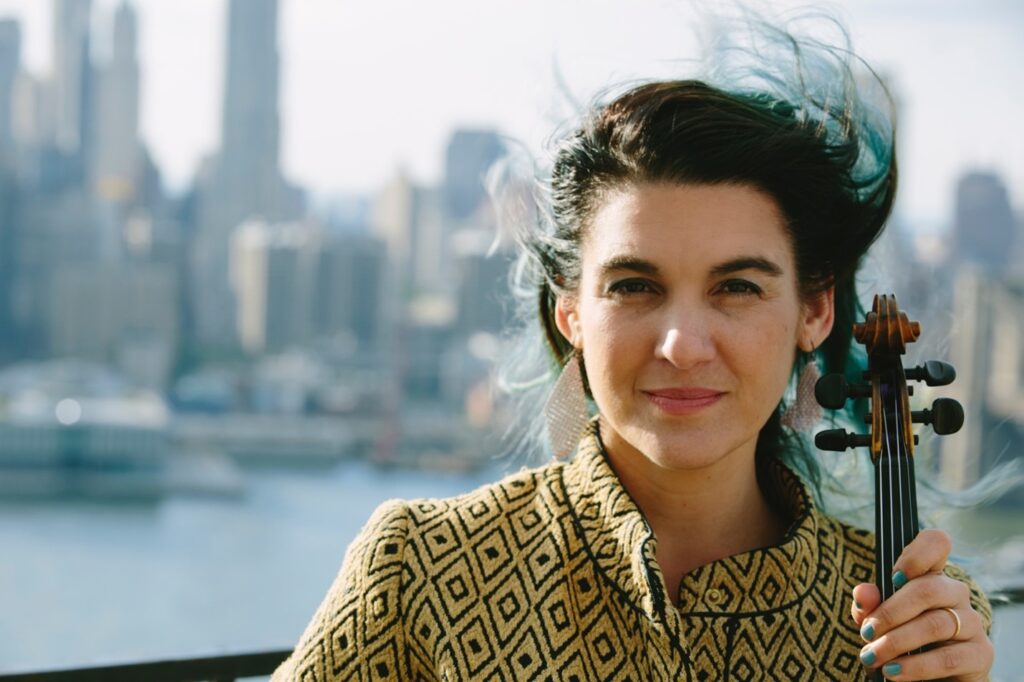 Alicia Jo Rabins is an award-winning writer, musician, performer and Torah teacher. The New York Times calls her voice “gorgeous”; the San Francisco Chronicle calls her writing “a poetry page-turner, both sexy and humble.” She is the author of Divinity School (winner of the 2015 APR/Honickman First Book Prize) and Fruit Geode (finalist for the 2018 Jewish Book Award), and has released three albums and accompanying study guides with Girls in Trouble, her indie-folk song cycle about women in Torah. Rabins lives in Portland, Oregon with her husband, bassist Aaron Hartman, and their two children. Find her at www.aliciajo.com.

In the early days of the COVID-19 pandemic, Alicia Jo Rabins found refuge in a hot bath—and she emerged with a series called “Bathtub Pandemic Poems“. Over email, in September 2020, she and Anthony Michael Morena discussed baths, the pandemic, and the poems that bubble to the surface when the two combine.

Anthony Michael Morena: One thing that has interested me about the pandemic is that the experience of the outbreak, lockdown, and recovery generally follows the same trajectory, but that experience is staggered, with people experiencing different stages simultaneously depending on their locations.

In Israel, and particularly in Tel Aviv, our initial lockdown was a huge success, and the virus was down to almost no new infections a day. We opened back up, starting with the schools, and now our numbers are worse than ever. We have now entered a second lockdown. With schools set to open back up again America, you might be on that same trajectory. So bathtubs that have been filled and emptied may have to be filled back up again.

What was the virus like by you when you first wrote the bathtub poems and what is it like now? What made you start writing in the bath?

Alicia Jo Rabins: Where I live – Portland, Oregon – we are still in pretty much full lockdown; not much has changed since late March. To use your language, the bathtub is still pretty much full – though we are in forest fire season and it’s dangerously dry, so perhaps that is not quite right either. At any rate, my kids’ public elementary school closed on March 15 and has not reopened since, at least not physically – school is fully online through at least November 5.

I suppose I feel a less acute fear of the virus now that it feels like a fact of life; it’s more of a chronic thing now. Trying to show up for Black Lives Matter, and my worry about the upcoming US election and climate crisis as wildfire smoke fills our skies and turns our sun red – these have nudged out some of my virus worries. But otherwise we are, sadly, in a state of suspended animation in many ways.

To answer the second part of your question: I started writing in the bathtub because it was the first minute I had to myself all day, after a long day of homeschooling my two kids, doing my share of the housework, teaching, and meeting my creative deadlines. I also take such hot baths that it puts me in a state of altered consciousness, which definitely was a sort of inspiration. I typed on my phone (my old one died and when I got the new one, it was waterproof!). Usually, I wrote while listening to the Max Richter album “Sleep.”

AMM: Most of your bathtub poems are collected on your website but at first you posted them on Instagram. Was there something more visual about them you wanted to capture? Is there a significance to these poems as images, in the fonts you used or the colors you chose as the background?

AJR: This is a pretty non-lyrical answer, but it’s the truth: form followed function in this case. I wanted to share the poems right away, because I felt I was writing them for now, not some future moment when this was all a memory. As I began sharing them, I thought about how to best present them in each medium. So for Instagram I tried to present them in a stark visual way; on Facebook I sometimes repurposed the Instagram post and other times simply included it as text. Now I feel dirty and like I want to go take a shower because I just named all these companies which are probably destroying our civilization. But, it’s the main way I have to communicate with the world, and I think on a net personal level it’s been helping me stay mentally healthy, so here I am, using them.

AMM: Hygiene is a way to fight pandemics. In the early days of the outbreak we were warned incessantly: wash your hands. Don’t touch your face. Did you ever consider your baths as a form of preventative medicine? If not to cure physical illness, were you treating the psychic symptoms of pandemic?

AJR: I absolutely believe that baths are medicinal – I believe I’ve even seen people quote research to that effect, though I haven’t bothered to look it up, because I KNOW hot baths are medicinal for me. I am so incredibly grateful to have access to a safe, reliable source of hot water and a bathroom where I can close the door, shake some drops of lavender oil into the bath, light some candles, and begin to repair what needs to be repaired.

AMM: Social distancing and lockdowns have intensified focus on domestic life. Breadmaking became so popular there were reports of yeast shortages in some places. I saw on your Instagram that you baked bread too, but you also chose to get in the tub. Maybe it’s a false dichotomy, but is a bath with its intensely private, personal, and maybe even decadent qualities a counterbalance to the increased domestic workload?

AJR: Absolutely – parents of young children are famous for hiding in the bathroom to get a minute of peace. I grew up baking bread and it was a real pleasure to reconnect with that pastime – and I even learned to make baby quilts on the sewing machine my parents got my daughter for her eighth birthday during quarantine! – but my husband and I navigated (and are still navigating) a constant stream of cooking meals, washing dishes, folding laundry, scrubbing toilets, sweeping floors, etc. – as well as an almost total lack of privacy. I say this with awareness of my tremendous blessing that we are healthy and able to work from home. Still, it’s a challenge, especially with no end in sight. The bathtub is absolutely a counterbalance to this shared domestic grind.

AMM: A number of your bathtub poems feature Jewish references. Did you feel that the experience of isolation (even within a crowded household) under the cloud of doom that is America 2020 as a spiritual experience?

AJR: Hmm…I can’t think of an experience that I would not call a “spiritual experience.” (Just like I would call every experience one has while alive in a body a “physical experience” on some level.) So, to answer your question, yes! Does it give the “yes” any less meaning if it’s not a “unique” yes? I don’t think so. Each experience is its own, with its own lessons, challenges, joys. Cloud of doom indeed. The police here (federal and local) are tear gassing peaceful protesters; as I said above, the sun is bright red because of the smoke in the air from wildfires up and down the West Coast, and the rain won’t be coming anytime soon. In the light of all this, some of the more intense passages in Prophets seem a little less mythical and more literal.

AMM: Baths have a significance attached to place. Being that water is scarce here, a lot of Israelis don’t even own baths: there’s a shower in the bathroom that has an angled floor that tilts towards a drain. There are Palestinians in the West Bank who are severely restricted on how much water they can use. A bathtub poem written here is going to have a completely different environmental and political message behind it than one written somewhere where water is abundant. To what extent are your bathtub poems localized? What politics inhabit them?

AJR: That’s such a fascinating point. I have lived in Israel before, so I know what you mean about the showers, and – side note – am also intimately acquainted with the squeegees. (And I also think of the mikvah as a sort of communal analogue to the bath as a space of sanctification, though I know that’s different from a personal bathtub.) I happen to live in a place where it rains eight months out of the year, so water is not particularly scarce in my immediate locality. And yet I know a bath is a privilege, a luxury, no matter where you live. There are other ways to clean one’s body, and most of them are quicker, cheaper, and use fewer resources. A bath takes a lot of water; energy to heat it; a structure to hold it; and time to enjoy it. I appreciate this privilege. And I also think that while a bath itself is not accessible to everyone, for reasons of locality or situation, the basic function of the bath – its symbolic resonance of healing, caring for the self, of claiming small moments of abundance and self-focus even in a world which clamors for constant attention and labor 0 is available to each one of us. It can be moving or stretching our bodies; breathing consciously; lighting a candle and sitting with it; making a cup of tea and drinking it. Or writing a poem; or reading a poem. Each of these actions creates space for simply existing, for pleasure or the compassionate holding of pain. Not waiting for someone else to create that experience, not having it relationally, but granting it to the self. Being enough, for a moment, on our own. And in doing so, hooking in to a deeper sense of who we are and how we are connected to the world. When I lived in Jerusalem, water was scarce, but prayer was abundant.

AMM: Baths that empty out always leave something behind, like a soap ring reside on the sides of the tub. When you look back at the initial baths and the bathtub poems you based on them, what did they leave behind? What would be different in a second round of bathtub poems?

AJR: Some of my poems (in my book Divinity School, for example) are more overtly intellectual, referential and complex. The poems in this series are intentionally simple, straightforward, and to the point. I wanted to allow myself to speak directly at a very specific moment in time, sort of like a lyrical diary. They simply are what they are, a reflection of the moment in which they were written. I think this is why I felt like sharing them out to the world rather than going through typical publication routes of magazines and websites, as I usually do. This makes it hard to answer your question; my mind sort of recoils at looking back at these poems in an analytical way. I did revise them; they’re not literally journal entries, and yet I feel the way about them that I feel about my old journals. I am grateful that the magic of words accompanied me in the sacred space of the bathtub during a heightened moment of transition and fear, when the world around me was shutting down, when Passover seders were happening on Zoom and that still seemed almost unthinkable rather than almost normal. 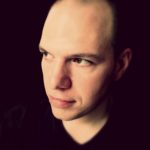 Anthony Michael Morena is the author of The Voyager Record: A Transmission (Rose Metal Press, 2016) and a fiction editor for Gigantic Sequins. His writing has appeared in Fence, DIAGRAM, Ninth Letter, Hobart, and The Ilanot Review, where he has also been a guest editor and interviewer. Find him on Twitter @anphimimor and at anthonymichaelmorena.com.