It’s nighttime, and the lights of passing cars flash across tiles
Covering the face of a grand house, a colonial relic of ochre tiles.

On each tile is a blue and white Star of David.  In Puebla, the offices
Of the Inquisition were just across the street from these tiles.

Each day, the Dominicans stared at them and cursed, but the owner,
A powerful converso, could afford a house with tiles.

He barred the heavy wooden door against unwelcome visitors.
Only moonlight entered through the windows, between the stars and tiles.

One day they came for the owner, took him in a cart over the mountains
To the capital to be tried and burned.  He lost his family, his house, his tiles.

Later, the Dominicans claimed there was a secret synagogue in the house,
But no one knows if that was true.  Moonlight still reflects off the tiles. 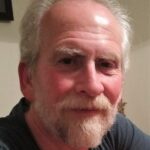 George Franklin is the author of Traveling for No Good Reason (Sheila-Na-Gig Editions) and Among the Ruins / Entre las ruinas (Katakana Editores); Travels of the Angel of Sorrow (forthcoming, Blue Cedar Press), and Noise of the World (forthcoming, Sheila-Na-Gig Editions). He practices law in Miami and is the co-translator of Ximena Gómez’s Último día/Last Day (Katakana Editores).