The treatments for my wife’s disease reached a point where they took away the energy to go to her doctors’ appointments anymore. So we crafted a homunculus to go in her place. We made it out of feathers and spit, a dab of vaginal mucous, a bolus of precum, and sweat lifted from her yoga mat with a long cotton swab, the oils her fingers left behind when she swiped her tablet and dandruff from her eyebrows, her skin dried out by the medicine she was prescribed. So mostly feathers, and it looked ridiculous, a half-plucked thing that could barely hold itself together. Which made it perfect, we thought. We named it Galum.

The doctors clucked concern when I brought Galum to the appointments in my wife’s place. “Highly unusual,” they said, and “we can hardly,” but I wasn’t listening because all the listening we’d done up till now hadn’t made a dent. Galum shivered under the paper gown, she coughed when she was told, and when they slid her into the tube for scans, she made a sound that I’m sure scared folks in the waiting room, even though all of them were terminal patients, too. It was even harder to listen to up close.

Back at home, my wife was sitting up in bed, pillow behind her back and laptop open in her lap. “How’d it go?”

“Me. And Galum. It’s too much. The doctors said the rapid progression of symptoms, through a system as juvenile as hers….”

“It’s my choice. It’s my life.” My wife coughed but it sounded phony.

“Galum needs a bath. Maybe you should think about cleaning yourself up, if you’re feeling better.” I led Galum to the tub’s edge and ran the water onto my wrist, trying for that temperature that felt reassuring without scalding. Galum shivered, watched, and then looked away. It wasn’t long before the water was ready and I helped Galum step over the tub’s side and into the water.

“Close your eyes,” I said, and put my hand on her feathered forehead. “Take a deep breath,” and I pushed downward. She bucked under my hand, but I held her under the water. “I know you’re scared,” I said. “But you’ve got to trust your Daddy.” 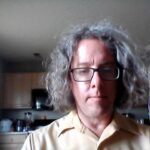 Matt Dube‘s stories have appeared in Pomme, Indicia, Front Porch, and elsewhere. He teaches creative writing and American lit at a small mid-Missouri university, and he reads submissions for the online journal Craft. He wrote this story to scare and disgust himself, and he’s excited to share that with you.