Why Don’t We Steal Away

You could argue the value,
the progress, of losing these jobs,
jobs that didn’t lead to better things
in an automatic Alger sort of way.

Plus Richard Scarry taught us how to love
the ones already lost, when we were kids,
and thus we were moved to teach our own children
what work isn’t anymore: dressmaker and grocer
and blacksmith and tailor,
Mr. Fixit, Mr. Frumble, Sergeant Murphy…
Paper-makers (non-artisanal) and a bricklayer
and the baker with dolls in his loaves.
Goodbye.

Nothing ventured, nothing gained,
says Poor Richard, nested in a quote within a quote
that ends with Kochs, or Small Cap Vanguard funds:
not avant but out there at the forefront of goodbye— 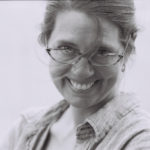 Sally Ball is the author of Wreck Me and Annus Mirabilis, both from Barrow Street Press. She teaches in the MFA program at Arizona State University and is an associate director of Four Way Books. She received a 2016-17 Faculty Fellowship from the Virginia G. Piper Center for Creative Writing.