The doctor cut me open behind a blue curtain. My husband watched intently, but I could only see his face. I was seeing the world through his eyes. I studied them for clues. I didn’t get many.

Finally, after long minutes of his talking and prodding and slicing, he pulled the little bloody boy out of my body and held him up, first for my husband, and then for me, to see.

I looked at my baby and smiled through tears, but I couldn’t reach out and touch him. My arms were outstretched, tied down. Mucus and blood covered his tiny body. A nurse wiped his mouth off so he could let out his first cry.

During Caesar’s reign, dying mothers were cut open to deliver their babies, so as not to lose one precious Roman citizen.

In 1881, a German doctor named Ferdinand Adolf Kehrer performed the first modern Caesarean section. The procedure of cutting open the body in order to avoid vaginal delivery has since saved the lives of many mothers and children.

When I asked my doctor what would have happened to me and my child in the past, before C-sections were invented, he said, matter-of-factly, “You would have died.”

After they cleaned my son, they brought him over to me. He had the pure, clear gaze of a newborn. I could feel him looking at me, through me, beyond me. Somehow, he knew me. He knew all my faults, all my blessings, all I would and would not be able to give.

On my son’s 18th birthday, we went for a walk in the woods.

He smiled and looked at his feet, at the just-defrosting ground of spring.

At that moment, I knew he would never be on his own, and nor would I.

I think sometimes about that C-section, how I resented the doctor for doing it, how I thought, from all the natural parenting books I’d read, that it was a lesser form of birth. I think about the separateness the operating room tried to bring to that moment, and about the connectedness that happened anyway. I think about my son’s newborn eyes, clear and trusting. I think about all the dying mothers in Rome, their babies cut from them like ripe fruit from trees. And I think about the graceful way the doctor, talking about motorcycles one moment and delivering a baby the next, raised my son out of my body, into the air. 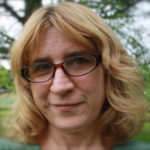 Vivian Wagner teaches at Muskingum University in New Concord, Ohio. Her essays have appeared in McSweeney’s, The Kenyon Review, Zone 3, The Pinch, and Silk Road Review, and she’s the author of Fiddle: One Woman, Four Strings, and 8,000 Miles of Music.