Click here to read an interview with Ravi Shankar

The Song of Questions and Answers

Q: Have you seen him here

black against his white
playing tricks as he wanders,
roaming wild?

A: Yes, we saw him here in Vrindavana,
Tending to and grazing his cows,
Calling them by their names.

His presence a river to drink from,
His compassion a field to play in,
Of each of us, he knows our secret names.

Q: Have you seen him here
trailing his butter-smell
in the scent of cows I anguish

at his absence even as he charms
everyone in Ayarpati
in the guise of Govardhana?

A: Yes we saw him here in Vrindavana,
in his garland of forest flowers
bright with bolts of lightening.

Having churned from ourselves
the froth of wisdom, his compassion
rises to fill our pails.

Q: Have you seen him here
that incorrigible liar,
my illusionist bridegroom

full of allure whom we only
glimpse for an eye-blink
before he vanishes?

A: Yes we saw him here in Vrindavana,
wheeling in the skies
on Garuda’s outspread wings.

Shaded by his wingspan
from the sins of karma
our fleeting lives unfurl.

Q: Have you seen him here
his glance flung out like rope
from his lotus eyes

to pull me towards him
mercilessly, dragging me,
a toy to play with, to discard?

A: Yes we saw him here in Vrindavana,
a dark elephant calf pearled
in a net of shimmering sweat.

In delight, the mighty one
ensnares us in blessing,
a game we mistake as fate.

Q: Have you seen him here
my precious sapphire glinting
light, my dear Madhava,

a slippery boar who breaks
through any net I stitch
without a single care?

A: Yes we saw him here in Vrindavana,
frolicking calf trailing yellow silk
as lightening trails a cloud.

Arrayed in playfulness, his dark
cloud essence rains down bliss
amidst our unrecognized thirst.

Q: Have you seen him here
the capricious, licentious
one whose eyebrows rise

in the curve of knowing
like the sarangi bow he draws
taut in the name of creation?

A: Yes we saw him here in Vrindavana,
his dark body, his face bright
as the sun rising over mountains.

To absorb the rays
of his kindness, we must rise
beyond our furthest horizon.

Q: Have you seen him here
darkness covering darkness
within and without, the storm

cloud Nampi whose amorphous
shape we cannot perceive,
which exists as bafflement?

A: Yes we saw him here in Vrindavana
constellating with his friends
like clusters of stars at night.

In the blackness of the void
he is illumination itself
who contains our cloudiness.

A: Yes we saw him here in Vrindavana
his fragrant, flower-strung hair
wild and bee-drunk.

His tresses plaited with stars
intoxicate us, pull us to him
with perpetual gravity.

Q: Have you seen him here
the flawless one
who commanded Brahma,

whose lotus home spins
out from his navel, to create
the worlds in play?

A: Yes we saw him here in Vrindavana
the great hunter who in the forest
slayed elephant, bird and Dhenuka,

Greed, flitting illusions we think
permanent, and self-deception
are his quarry and our release.

So Kotai of Visnucittan having seen
on earth in Vrindavana such miracles
wrought by the Lord who saved the devout
elephant, assures those who sing
these questions, sing their answers,
will live forever in grace at the feet
of the Lord for her words will be
as medicine in their mouth.

Forthcoming in the collection The Autobiography of a Goddess (Zubaan Books, India), distributed by University of Chicago Press 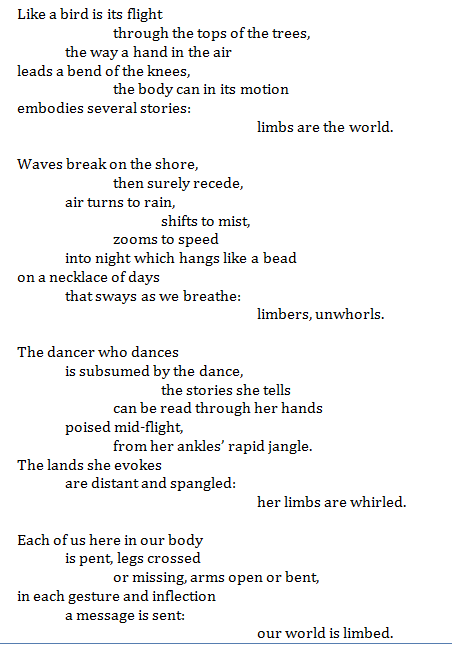 Note: The ghazal is originally an Arabic form that generally consists of discrete couplets with an intricate rhyme scheme (the qafia)  and a repeated refrain (the radif) at each end. As the late Kashmiri-American poet Agha Shahid Ali and great exponent of the form in English has written, “each couplet must be like a precious stone that can shine even when plucked from the necklace though it certainly has greater luster in its setting.” I’ve adopted this form by deconstructing and using homonyms as part of the rhyme scheme to describe Bharatanatyam, the classical form of dance that originated in the Southern Indian state of Tamil Nadu and of which my younger sister was a great practitioner. One of the striking parts of this dance is the use of hand gestures, or mudras, which convey narrativity based on the subtlest changes, and my hope is that this is enacted within the formal mechanisms and musicality of my own deconstructed ghazal. 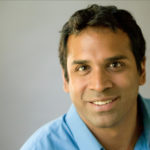 Ravi Shankar is Poet-in-Residence and Associate Professor of English at Central Connecticut State University, Chairman of the Connecticut Young Writers Trust and the founding editor of Drunken Boat. He has published or edited seven books of poems, including Deepening Groove, Radha Says, Seamless Matter, Voluptuous Bristle, Wanton Textiles, and Instrumentality. Along with Tina Chang and Nathalie Handal, he edited Language for a New Century: Contemporary Poetry from Asia, the Middle East & Beyond (W.W Norton & Co.), called “a beautiful achievement for world literature” by Nobel Laureate Nadine Gordimer. He has won a Pushcart Prize, been featured in The New York Times and the Chronicle of Higher Education, appeared on the BBC and NPR, and has performed his work around the world. He is currently on the faculty of the first international MFA Program at City University of Hong Kong.

Priya Sarukkai Chabria is a poet, novelist, essayist and translator with five books.  Twice acknowledged by the Indian Government for Outstanding Contribution to Literature, her work is translated into six languages and published in anthologies, journals and websites. Miniature paintings and cinema are her other passions; she has collaborated with artists from  the cinema and classical Indian dance. She edits poetry at Sangam (www.sangamhouse.org). Andal: The Autobiography of a Goddess, a collaboration with Ravi Shankar, is forthcoming by Zubaan Books in India in 2016. Her website is www.priyawriting.com.

Andal (Tamil: ஆண்டாள்) is the only female among the 12 Alvar saints of South India. Born in the latter half of the 8th century, Andal is credited with the great Tamil works, Thiruppavai and Nachiar Tirumozhi. Andal is known for her unwavering devotion to Lord Vishnu and was adopted by the Alvar saint, Periyalvar, who named her “Kotai” or “gift of Mother Earth.” She apocryphally disappeared as a teenager and the Srivilliputhur Temple marks her birthplace and her life. She is still worshiped as a saint today in parts of South India.