There’s this buzz coursing through my bloodstream all the way to the undersurface of my nails, seeping through, spreading out to make the most of this body of territory I like to call mine. Spike (the verb) a dash of alcohol poking fun at my synapses and pulling them out of their comfort zone the way an overzealous uncle finds it appropriate to grab your arm and pull you over to the dance floor at some distant cousin’s wedding proceeding to spin you round and round to the clapping, work-witnessing knotted hands and inebriated smiles of family members you now get to see only in pictures or at familial events of the matrimonial and/or mortuary kind if at all.

Yes, I have had a few drinks and I’m not ashamed to admit it. There is mindless joy (the best kind) in relinquishing control and realizing that the statements your (OK, my) brain is vomiting with the flashing speed of un-yet-thought thoughts are comforting and identifiable with – all they ever wanted was to be(long), innit?

So I’m walking home down this boulevard that reminds me in a way of the big avenues of our hometown – grandeur of contrived cityscape embedded in my spatial radar to the point where anything big makes me feel like home, albeit oppressive and un-natural, not belonging to the natural world that is – and I’m immediately gripped by this exultation…call it zizz. Call it fluttering emotional juicy cumquat. Call it euphemistic epiphany or don’t call it anything at all if that floats your boat (assigning meaning stripped to its bare linguistic bones is nothing but mean ass).  I walk the walk and think the walk until all of a sudden out of nowhere or perhaps out of everywhere my mind steers into overdrive mode and these thoughts enhance my otherwise firmly anchored reality with the contrast medium of You. I must admit I am utterly smitten with the preternatural randomness of my hippocampus’ ability to pull out you-rabbits from its bottomless top hat.

It’s all cinematic and perfectly framed and I could not have done a better job at even dreaming about writing it and that my friend is frustrating yet evermore satisfying: being one with the scene…Created by it…In it…It.

I feel like an impostor hanging words on these moments I now have hooked on the rack of my mind, hatchet of analysis in hand ready to hack out their meatiest meat in some sort of pseudo-artistic attempt at poeticizing it all in an Athelas regular size 12 font.

Fuck it! In beer blurt:

Fear fuels my inscrutable insecurity making it whizz and hum: at times in the background heard across the garden from the garage, other times ringing in my ear like I’ve got my head pressed to the source of its moan, but always there with its incessant rumble as if it’s so fucking unfathomable that you might actually like me. And I carry it with me always in plain sight – a fallibility reminder the way a Desoto roadster carries its spare tire in the open. And I know that any exhaustive attempt to set the restless mind at ease is just that: one attempt in a long series of other necessary attempts because there is no permanent setting at ease. The fear won’t cease to exist.

And then you do something that annihilates it all for less than a nanosecond if I’m being honest, but so full of mass although physical sizeless, subatomic. And this something comes unexpectedly and unasked for in a form whose existence had been unknown to me yet the mere experience of it renders it indispensable.

[This doesn’t make any sense you say in a parallel narrative that writes itself alongside what I am writing now.]

Like the time you kissed my forehead out of the blue or green or yellow or maybe out of why-the-fuck-not, making me feel suspended from your lips, a continuation of them as if I were this bit of almost shedding dead skin – still life. Or the time you rested your head on my womb conveying a sense of weightlessness as if I were holding your earlobe and nothing more even though an overhead dolly shot would have surely revealed your head concealing the entirety of my belly.

You might think these reductionist anecdotes point to a loss of self – these grand moments of you pressing all of me like the pages of a massive tome, that hold between them the last chlorophyll heart-beats of a soon-to-be dry, dead plant.

I guess what is momentarily rendered invisible by way of these moments is the fear. And with it any notion of doubt disappears, but not due to some countering certainty. It simply becomes redundant, allowing me to lie full-on naked on the nothing else mattress we’re sharing. 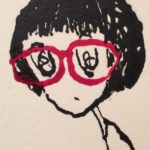 L. Haiman is a Bucharest-born-Edinburgh-educated-London-living writer whose work has appeared online in Minetta Review, Pilcrow & Dagger, decomP, The Missing Slate, in print in Anything, Anymore, Anywhere, and in the short story anthologies, Garlic and Sapphires, and Two In the Bush. L. Haiman is an ongoing collaborator of illustrator Via Fang http://viafang.com