Immigrants and Kings: The Letter in the Empire of Poetry

The writing of letters is an art as old as any other, and came to us, if Berossus, Priest of Marduk in Babylon is to be believed, when Oannes, a great fish with the head and feet of a man emerged, speaking, from the Erythraean Sea. Oannes taught the ignorant people of Chaldea not only how to write, but how to build houses, found temples, compose laws, collect fruits, and distinguish between the seeds of many different plants.

As venerable as writing was in the tale told by Berossus, it is more venerable still as described in the pages of the Sefer Yetzirah, the first great work of Jewish esoterism. Reading this ancient work we find that God created nothing—not mankind, not the seraphim, neither the earth nor the heavens nor seas—until he first created the alphabet. “Twenty-two letters did he engrave and carve,” we read, “he weighed them and moved them around into different combinations. Through them, he created the soul of every living being and the soul of every word.” The letters, fixed on a wheel of 231 gateways, precede and give birth to all else in creation.

We don’t know exactly when poetry began, though we have, from a few surviving totems and similar relics, a sense of when symbolic thinking came about—some 70,000 years ago—and we can surmise that poetry, in the form of ritual incantations, funeral rites, and tales of tribal origins, emerged around the same time. Writing, even in its most primitive forms, came about many thousands of years later, after the agricultural revolution created a need for contracts and tally-sheets for merchants in grain and cattle. Only later still did writing become sophisticated enough to record poetry.

All of this is by way of saying that letters come late to the great and ancient kingdom of poetry, a kingdom that accepted them begrudgingly. Poetry had conquered the wilderness of forgetfulness with an army of literary devices—anaphora, rhyme, meter, and so forth—that aided memory. Poetry had created grand palatial epics and delicate pagodas of lyricism. What need had it for the humble symbols pressed into clay by riverside accountants totting up measures of barley? Humble immigrants to the empire of poetry, letters needed stories about their ancient grandeur, how they had a lineage as long as that of any art, how they were the special children of a God who loved them first.

Mesopotamia, being the land between rivers, was rich in marsh reeds, and richer still in mud and the sunshine that dries mud into clay. It had everything it needed to develop a system of writing. Letters weren’t a part of Mesopotamian notation systems, though, not at first. As far back as 3300 BCE we find tablets with drawings of barley and cattle, used to keep inventory or commemorate a handshake deal between farmer and merchant; merchant and tax collector. Slowly the drawings became standardized, and more abstract. But they were not letters: they were pictograms, visually mimicking the things they represented. Later, they became ideograms, depicting ideas associated with the things they represented. Three small triangles, initially representing mountains, came to mean “border.”  Later still, symbols could be combined: the little drawing representing “man” could be written next to the mountains representing “border” to indicate “foreigner.” Or “slave.” There does not appear to have been much distinction between the two.

This was, at best, a partial script. Like mathematical or musical notation, it was useful for certain things, but it could not yet describe the whole world. Letters proper—signs indicating sounds, or phonemes—came gradually into cuneiform script, beginning around 2800 BCE.  It started with the creative misuse of pictograms, in which they came to stand not for the thing they depicted visually, but for the sound of the first syllable of that thing’s name. Once this system, which linguists call the rebus principle, was established, writing became much suppler and more flexible. It could convey grammatical relationships. It could tell stories. It could even let you sign your name.

The first name we have in these new letters is “Kushim.” He wasn’t a king or a priest or a general.  He was a clerk, a kind of bookkeeper or low-level accountant; and, at the end of a tablet concerning the delivery of barley, he wrote the syllables for his name—the first surviving human name recorded in all of history.

From here, letters found their way into the temples, where they recorded not units of barley, but the poetic hymns composed by Enheduanna, daughter of King Sargon and High Priestess of the moon god Nanna; and into the libraries of kings, where they held the words of the epic tales of Gilgamesh and his quest for eternal life. Letters had arrived, at last, in the glorious kingdom of poetry. They had associated themselves with prestige, made the big time at last. But the myths of their divine origins, as given to us by the gods, or created before the world itself, are false. Letters weren’t so aristocratic: they were humble strivers, making their way to the courts and high temples only after generation upon generation of hard and humble labor.

Like many arrivistes in the world of high culture, power, and glamor, they were a little embarrassed about plebian old Uncle Kushim, hunched at his little desk over his accounts.

In the kingdom of poetry, the letters, like many immigrants, tried hard not to draw attention to themselves.  They were, in a sense, invisible, at least most of the time, and were resented if they asserted themselves—a situation that continues even now. The other day, for example, I spoke to my publisher, Marc, who complained about another writer he published. “He’s impossible!” Marc said, “he spends hours asking us to try new fonts, or to make them a point larger, a half a point smaller. It’s driving me mad!” Letters aren’t supposed to be that important in a poem. Indeed, while a poem translated into a different language is only the same poem in some qualified, limited sense, a poem in a different font, a different typeface, a poem written out in cursive script or printed on a page, is always considered to be the same poem. The letters do the work of making the poem appear, but they, themselves, are unimportant, interchangeable.  They’re like the seamstresses whose nimble fingers make possible the fashion collections we see on the runway, people we pay no attention to whatsoever as we clap at the name of Ralph Lauren or Vera Wang.

Letters. Can we imagine poetry without them? Even the spoken word poets draft with letters. But we usually see right past the letters, ignore their shapes, let them be invisible.  Humble and happy just to be in such glamorous company, the letters don’t complain. They ask for little, demand no attention.

Except for when they do.

When Stéphane Mallarmé took Un Coup de Dés to his publisher, he was adamant: the words were to be dispersed around the pages just so, with this much white space here and that much of a margin there. And the words were to be printed in letters of different point sizes, and in a variety of fonts. That is to say: the letters were to assert themselves in the poem, to make themselves visible as letters. The poem would not, could not, be itself without the specific contributions of these letters being exactly what they were. They were not interchangeable; they were not to be overlooked. They were to declare their presence as an integral part of the poem.

It was commerce that gave birth to letters, and—despite Mallarmé’s sniffiness about mere business—it was commerce that came to the aid of letters now, as they stepped into the light.  Mallarmé had, after all, been inspired by the layout of the advertising posters just starting to pop up on the streets of Paris.

Commerce, long the friend of letters, does not exhaust their capabilities—nor does their mere utility as the invisible bearers of art. Indeed, poets have, at times, come to appreciate the mystic bent in letters.  In Gérard de Nerval’s Aurélia, for example, we find the poet crying out that the alphabet has come down to us broken and distorted, that we must “recover the lost letter or the effaced sign” to read the truth and be made spiritually whole. And in Aram Saroyam’s single-letter, untitled poem consisting of a four-arched “m,” we see something like a fulfillment of Nerval’s dream: a poem that consists of a new letter, implying the birth of an alphabet, and the possibility of meaning beyond anything any of our alphabets has created yet. Here the letter is not the humble servant of palace and temple in the empire of poetry. Here, at last, the letter is priest, the letter is king. 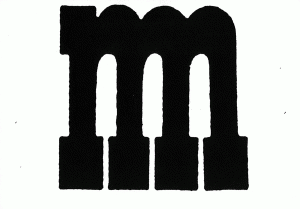 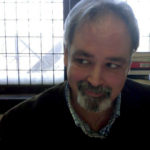 Robert Archambeau is a poet and critic whose books include the critical studies Inventions of a Barbarous Age: Poetry from Conceptualism to Rhyme; The Poet Resigns: Poetry in a Difficult World; Laureates and Heretics: Six Careers in American Poetry; as well as the poetry collections The Kafka Sutra; Home and Variations; and, most recently, Revolutions: A Collaboration (with John Matthias and Jean Dibble).