Just as I finish constructing one moment, I am expected to architect another. I still
fail to understand the future tense, this talk of something borrowed, but never
returned.

Take what’s in this skin, for example. What it embodies. A body behind a word,
whatever word that is. I cannot claim my thoughts as anything more
than a costume. I wear competent clothes & speak regrettable language. I feel
so ashamed of the awful vowel sounds of English.

The clouds become an empty background; you know there’s a word for that
nothing. The windows struggle to stay out of view.

I must ask you to do a few things when evening comes, none of which include
saying any prayers. Believe that evening will follow closely behind day. At night,
make a basin of salt water to wash the brass & polish the silver. Make
the mahogany shine like a mirror.

I hoped to find a farmhouse or something, but was disappointed to find it;
I heard the sound of a car, but gave up hope of ever finding the roadside.

Go outside expecting nothing. When you see it, let it startle you.

I know not where the body gets taken at night in dreams. Whatever bedclothes
you wear, closely examine the contents of your pockets upon waking. I forget that
the majority of existence is silence & a thief delights most in such quietude,
being a greater part richer in it.

All such crimes consist of a subject & an object, & you rarely see beyond the end
of the sentence. It ends in a question mark. I answer to such greed
too often with “yes.”

I have another theory: there is more than one side to blood. I steal through it.
But, it is wise to keep a few secrets to myself. There is no hour before midnight when everything becomes illuminated, so I let lamplight mock me.

I say my head is like a bachelor’s house, so full of garbage.

The direction the blood points changes. Birds get rich by sitting in a tree, waiting
for everything below to be trampled. If God forgives us, it doesn’t last long. 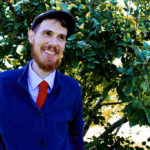 Douglas Luman is a co-founder of Container, art director at Stillhouse Press, head researcher at appliedpoetics.org, a book designer, and digital human. He is an Assistant Professor of Computer Science at Allegheny College. His first book, The F Text, was released in fall 2017 on Inside the Castle.