“Love is a hard word to say

in the atmosphere of the draft board

and the board members may be embarrassed

and a little peevish to hear it mentioned.

It is fitting, however, that the objector be bold

in the knowledge that he (however unworthy)

is with the prophets, and that his inquisitors

(however worthy) are speaking for the dead

past out of which man is creeping. It is not right

that advocates should apologize or flinch from love.”

Your sister till death 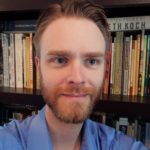 Kent Leatham’s poems and translations have appeared in dozens of journals, including Ploughshares, Prairie Schooner, Fence, Softblow, Able Muse, and Poetry Quarterly. He received an MFA from Emerson College and a BA from Pacific Lutheran University, served as an associate poetry editor for Black Lawrence Press, and currently teaches writing at California State University Monterey Bay.