When we are all twenty, we go to a beach house for a portion of our spring break. The boy whose family owns it is an old friend, but he’s too strange to be a close friend. He is a repository of sub-Reddits, character bits, and ever-fluctuating dosages of Ritalin. His name is Tenor because his mom was super into music when she had him, but he prefers to go by just T, so we oblige.

The beach house is two stories with two decks and spaced far enough away from the neighbors that our bass-heavy music is only a muffled hum to them. As soon as we arrive, we scramble through the house to pick our beds. We pull crystalline wine glasses from the cabinets and fill them to the brim with chardonnay from a bag. We set up red plastic cups outside to play drinking games in the elusive Pacific Northwest sun, and we binge-drink and get high and take risks because we are all twenty and we still think we are immortal.

This beach house is on the Washington coast, so when we venture over the single sandy dune to get to the water, we wear our coats. We are fresh from doing shots of whiskey at noon on this day, so when we wade calf-deep into the ice-cold ocean, we only giggle at the tingle. Half the photos we take are out of focus, but we don’t realize this until a day later. We are too busy burning chicken in the oven and smoking weed on the back porch and pretending this will last forever.

The same day we go to the beach, Tenor takes some acid and does cartwheels on the sand. He says he’s never had so much fun here in his entire life. When we return to the house, we are greeted by a fridge stocked full of candy-colored Jell-O shots and ten-dollar vodka handles. We fling these Jell-O shots across the room like mini Frisbees, and soon we all have stained tongues.

There is no Jacuzzi here so a group of us cram into the master bathtub and turn the jets to full blast. The weirdness of the situation is half its fun, and we pass around a bottle of cheap champagne to acknowledge that fact. The bubbles inspire us to go back outside, and we play ‘80s music while bouncing ping-pong balls at red cups. We can see the encroaching clouds of a storm coming so there will be no sunset this night—we light sparklers in its absence.

On our final day at this beach house, the storm traps us inside all day. Washington rears its ugly head and reminds us that we are in a land of relentless rain. The morning is gray until Tenor finds the last bottle of cheap champagne wrapped in a towel he thought he’d left at home. We make mimosas to kill our hangovers and shake our grogginess with bacon and eggs.

The storm outside howls in a way that is unforgiving, but we accept its apology anyway. Instead of going to the back porch, we crack a window to smoke weed. We finish off the rest of the Jell-O shots. I watch the red cups on the deck spiral and dance in the wind, but I don’t say anything. We still dance and drink and laugh, but we are all coming to the confrontation that things must come to an end.

When we are all twenty, we go to a beach house and forget that it’s all temporary. We play pretend and ignore the inevitable. We wake up with sandy toes and messy hair and trick ourselves into thinking this feeling can last forever. We don’t know it yet, but the time at the beach house is an elaborate ritual for goodbye.

Two months later, I will leave the Pacific Northwest and return to California. I will only ever see two friends from the beach house again. Tenor is not one of them. I will talk with these friends on the phone and we will meet on warmer beaches where the storms are never as relentless and unforgiving. We will hear through the grapevine that one person from the beach house will develop a prescription pill addiction and another will drop out of school and a third will delete all online activity in a “social media cleanse.” Tenor will train to be a child psychologist for the state and when he posts a photo of the beach house trip two years later, we will all like the picture but not leave a comment.

We are no longer twenty, we know what it means to be temporary. We learn from hindsight. We now recognize the elaborate rituals of saying goodbye. We hope they will never find us, but understand when they come. 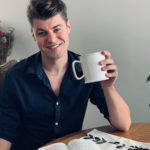 Harrison Pyros is an Economics and English student at UC Santa Barbara in California. He writes satire, social commentary, and fiction about life up and down the west coast. His previous work has appeared in the Santa Clara Review, The Roadrunner Review, and Writers magazine. He can be found at harrisonpyros.com.