Anyone Could Have a Godzilla

A week after the shooting, my father switched the TV channel to some movie about visitors. The spaceship landed in a woman’s backyard while she was taking out the recycling. The craft started to hum to her, a short boring melody only someone who has difficulty remembering all the lyrics may enjoy.

My father’s wife went to church every Sunday. The shooter took out seven people right outside. The police returned his wife’s purse afterwards and my father looked inside. He’d never done that before, never had a reason to go in a woman’s purse in his life.

It contained the usual: tissues, lipstick, paracetamol, and a plastic Godzilla I supposed she intended to return to some kid on the street. That, my father said, or even after twenty years of marriage it’s impossible to know whether someone keeps a Godzilla in their purse.

I left in the morning. My wife and son stood at the airport holding up a sheet of paper with my name crayoned on like a joke. They just wanted to laugh, I suppose, wanted something to talk about other than the shooter and his God.

I called my father later, told him my wife liked the pearls, and asked how Godzilla was doing. It was in the lounge, he said. It looked like it wanted to take out the whole place, but knew its tiny claws were plastic. Other than that, we didn’t say much. I returned to work and didn’t see him until the holidays.

We stopped by before visiting my wife’s parents for Christmas. The tree was up with Godzilla on the top. I didn’t ask where the angel went. I said the house was looking great. My father had decorated and the woodwork outside was so white the lights he’d strung up made haloes on the paint. I stood outside with him while my wife did the dishes and he smoked the sole cigarette he allowed himself every day. The place looks great anyway, I said, what have you been doing?

The same, he said. Work, digging up the flower bulbs, pulling weeds.

He studied the sky, an aeroplane blinking across us. He’d been thinking about that movie, he said. There was something going on there. Think about it, that spaceship wouldn’t land just anywhere. Those visitors were probably flying around forever, choosing precisely where to land, just who they’d talk to. It wouldn’t be just anyone. Looking down, we’d be specks, he said. Just stripes on a lawn and constellations of plastic reindeer on the roof. That’s all they’d have to go on, what was outside our houses.

I nodded, sure. The smoke around his mouth drifted. I turned towards the guy next door switching his lights on.

Together, we looked up at the flashing lights in the eaves, an SOS of ordinary men looking for something to believe. 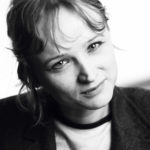 Angela Readman’s stories have won The Anton Chekhov Award for Short Fiction, The Costa Short Story Prize, and the Mslexia Story Prize. Her collection Don’t Try This at Home won the Rubery Book Award and was shortlisted in The Edge Hill. She also writes poetry and her collection The Book of Tides was published by Nine Arches. In 2019 And Other Stories released her first novel, Something like Breathing.