to wherever a harvest is sold

fall into seams of drought

I carry in a wheelbarrow

to be counted by my father & burnt

broken as my breathing & efficacy of light. 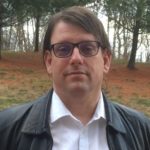 Brent House, a coeditor for The Gulf Stream: Poems of the Gulf Coast and a contributing editor for The Tusculum Review, is a native of Necaise, Mississippi, where he raised cattle and watermelons on his family’s farm. Slash Pine Press published his first collection, The Saw Year Prophecies, and his poems have appeared in journals such as Colorado Review, Cream City Review, The Journal, Third Coast and The Kenyon Review.