The couple at the bar wants to adopt me,
­———even though I’m twenty-four, and I’ve just
ordered a White Russian, and my date’s
———waiting for me with his pitcher of beer,
and what was I thinking, ordering a drink
———with cream in it, but at least it’s not milk,
when the wife asks me to recite a poem—
———“Just a line,” she says. “I want to hear
your voice more,” as she calls her husband
———to come over, and I forget about my date,
wondering if these people are looking to make
———their celebrity fantasy come true, quenching
their desires for an Asian baby, only I’m not
———a baby anymore, despite what some men

———try to call me, and I can’t be a baby, because
I behave myself way too much, and I wonder if
———the three of us are actually starring in a play
of three acts: in Act I, my character meets them
———at a bar, and the wife character says she wants
to adopt me, but the audience knows, and I know
———what this woman and her husband really want
isn’t an adoption, but a three-way encounter, and
———hello, that’s the beauty of theater: the truth always
comes out. And question: is it considered Oedipal
———or Elektra if you bang someone who is playing
your parent? I’m asking for a friend, really, since
———I can’t say I’d do it, because I’m not anyone’s
fetish, and look, I get it. I hate clothes, and I might

as well be wearing a bib with my crop top and
———mini skirt, and I love the video of the drag queen
getting a bib in the mail, saying she’ll bedazzle it,
———rhinestoning it all over, and that would solve
at least two of my problems, and I’m drinking
———a cocktail with cream in it, but at least it’s not
milk, sitting atop a pool table, spreading my legs
———just a little, but not too much, reminding me of
time the Russian architect offered to buy me bulk
———candy if I watched a German film with him, and
no boy, no, don’t you dare try to buy me, and deep
———down, I’m really such a good girl, and in this three-
act play, I end up leaving the couple at the bar, alone
———with their fantasies, return to my date—chug his beer.

Love Letter to Jello Salad, Time Travel, and My Mother

———and I can’t wait for dessert, and as a kid, I craved
egg-shaped JELL-O around Easter, or what about
———grocery store deli gelatin that’s made in a mold

and oh, so colorful, and isn’t it such a wonder how
———different shapes can enhance the taste of food, like
flower-shaped doughnuts in Japan, preferably in

———matcha or strawberry, or how the heart-shaped
chocolates in the Valentine’s Day selection always
———taste the best, and as my mother and I pour the gelatin

dessert into glass cups, I tell her about my fascination
———with jello salad, the way one recipe calls for celery
and cream cheese and pecans and pimento peppers

———and crushed pineapple, and another calls for 7-UP,
the salad a seafoam green—and my mother says that
———cakes with gelatin are always popular in Hong Kong,

especially at weddings. I wonder about my mother
———growing up in Kowloon, watching her favorite show:
the drama about the father and daughter on a journey

———throughout rural China, searching for the mother and son,
their family torn apart by an evil force, and whenever I ask
———my mother whether the family ever reunites, she never

remembers, and I guess that’s the romance of it all, and
———in a sense, the ending doesn’t matter, because the story
isn’t about reuniting. It’s about where your heart lies

———and how far you’ll go for the ones you love, how much
you’ll sacrifice—the never-ending journey, because
———the family can’t imagine a day go by without one

another. I can’t imagine a day go by without my mother,
———and as we put the gelatin in the fridge, I wonder about
what she was like as a young woman, and I daydream

———of the alternate history of sixteen-year-old me building
a time machine and traveling back to 1980s Kowloon,
———becoming friends with my mother, and this reality’s just

beautiful, isn’t it? I’d visit her childhood home, the size
———of a celebrity’s walk-in closet, as Grandpa arrives home
from work overseas, and my teenage mother’s on the phone

———with her friends, and my Grandma’s outside in the heat—
long hours at the pajama stand, local aunties and moms
———haggling prices. In real time, my mother and I drink tea,

and I daydream about the egg-shaped JELL-O I craved
———as a child, while my mother tells me about her favorite
superhero as a kid: Ultraman, who protects the Earth

———with beam attacks, superhuman strength, and the ability
to turn giant—his egg-shaped head, his named translated
———to “salted egg” from Cantonese, and my mother and I,

we laugh over how his English name doesn’t pay homage
———to salted eggs or duck eggs or even JELL-O eggs, and I’d
do anything to protect my mother—like mother, like daughter. 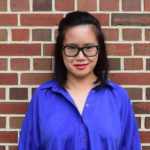 Dorothy Chan is the author of Chinese Girl Strikes Back (Spork Press, forthcoming), Revenge of the Asian Woman (Diode Editions, March 2019), Attack of the Fifty-Foot Centerfold (Spork Press, 2018), and the chapbook Chinatown Sonnets (New Delta Review, 2017). Her work has appeared in POETRY, The American Poetry Review, and the Academy of American Poets. Chan is an Assistant Professor of English at the University of Wisconsin-Eau Claire and Poetry Editor of Hobart.