Leeore stands at the end of the hall. He puts on the mask; he removes it. Because he is very tall and thin, I know it is him even when he lifts the mask. Now you see me, Nicole, he says. Now, you don’t. I say, But I do. He says, You only think that it is very likely to be me. There is no such thing as certainty. But I am certain that those are Leeore’s boots. The pair he had before had become scuffed and worn, and the pair he had before that had also been scuffed and worn, so every few falls, Leeore has confided, he mail-orders the same boots. The sun, he says, is very likely to rise—we expect it to—and the pencil, he says, that I lose in my dream is very likely to be the pencil that you find in yours, but nothing is certain. He lifts the mask again. Leeore, I say. He does not answer. I was the one who lost the pencil, I tell him. Everything has become something else, even the immutable. You must lengthen the line, Leeore says, until it becomes a circle. Again, he lowers his mask. I don’t know what you mean, I say. But I do.

The chairman sends out an email that reads: Employees shall not write stories about other employees. There is no I in TEAM. Leeore is visibly upset. There is no u in viscosity, he says. No m in pear! No oyster in pearl. No umlaut in Göd. Do you see what I did there? He asks. I umlatted Göd. But of course I can’t see; we are speaking, not writing. No, Leeore says, we are always writing. To encounter a word is to encounter the word as word. I think he is probably right. I draft two emails in response to the chairman and then decide, instead, to write a poem. In the poem, there is a chairman sending out emails. I leave the poem on the copier. When the chairman calls me into his office he says: Nicole, you have always been so wrong about me. I say: Chairman, the sparrow. He says: The swallow. I say: swan. Him: swell. Me: sew. Slur. Slip. Surly. Slurpee. In this way, we pass words back and forth never encountering meaning.

It wasn’t that I had lost the key. I had the key. I had been carrying it on a chain with all of the other keys. I had not wanted to lose any of the keys, so I placed them on the chain which was very large and very heavy. I did not like searching for keys in my bag; I liked to reach in my bag and grab the very large, very heavy chain and pull it out and find all of the keys. One let me into my office which I liked to overheat; one let me into my home which was often quite cool. But this key, I had no idea into what room it would let me. Leeore didn’t know either. He told me to close my eyes and feel the weight of the key in my hand. He asked if I could remember its catch. He said that if I held the key for long enough the space which it opened would emerge. But he was wrong. Sometimes I am wrong, he said. Yes, I said. Me too. 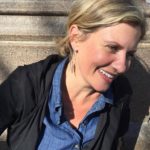 Nicole Callihan writes poems and stories. Her poems have appeared in PEN America, Copper Nickel, Tin House, and American Poetry Review. She has several volumes of poetry, including SuperLoop and Downtown, and a novella, The Couples. Her latest project, Elsewhere, a collaboration with Zoë Ryder White, won the 2019 Sixth Finch Chapbook Prize and is now available. Find out more at www.nicolecallihan.com.