Vertigo of the Blood

Translated from the Hebrew by Ilana Kurshan

Like every Wednesday, at the end of the school day Amit Danon, homeroom teacher of class 11-C, parked her Fiat two or three blocks away and made her way quickly toward the building, walking against the cold wind. As always, she didn’t know how to resist a fleeting glance upwards—in any case she wouldn’t be able to see anything through the window—or how to restrain her too-hasty flight up the stairs, after which she had to pause in front of the door to catch her breath. Her entrance was always awkward, pressing her way in while he closed the door behind her, laying down her bag, turning around to hug him. Then she would let him take off her coat and they’d exchange a few words on their way to the bedroom, where he took off the rest of her clothes. They were efficient with their limited time, but they took care to refrain from a dry practicality that would have offended them both, they’d learned to be carried on waves of affection and gratitude. Beyond the closed shutters in the bedroom the afternoon was bright and cool, the wind whipped around the building, and she shivered at the touch of the cool sheets against her skin. His caresses, initially intended to warm her, went on to arouse them both. Eyes closed, she followed the path of his lips along her shoulders, her breasts, and down her belly, and felt her knees growing pleasantly weak, and then her whole body, a vertigo of the blood. She was a tall, full-bodied woman, and already on the first few encounters there was an effortless affinity between his body and hers. After over a year they were both skilled inthe way to pleasure, and sometimes, like this time, she even had to restrain it a bit, to push off that quaking, before she surrendered to it and that same shudder seized them both, drew them even closer to one another, subsided. She lingered a few more minutes in that sweetness, her face in the crook of his neck as in a hideout, until their double panting slowed down. The light in the street faded slightly, heralding the early winter twilight, and she returned to hearing the sounds of the world beyond their dark capsule – the roar of a motorcycle, the persistent barking of a dog below, the whistling of the wind. Everything she’d repressed – the two children, the school day with all its nuisances, the rest of her daily duties – stole its way back to her, along with the knowledge that she refused to grant any foothold at the moment — that one day she’d have to give up on all of this, to put the secret away in a box and close it up. She held out her lips, they kissed languorously, and then after another short kiss, a brief flutter of a farewell, she dressed almost as quickly as she’d been undressed, and left.

A few minutes later Alex heard the light tap on the door and the short wail, resembling a chirp. How did she always know not to come when Amit was over, he wondered. Reluctantly breaking free of the warmth and that faint perfume, the traces of Amit in his bed, he got dressed and went to open the door. Sara entered with her arrogant gait, her tail upright. She rubbed against his leg and turned around to rub against him again, as if affirming her hold on him. Then she arched her back and he bent down to pet her and wondered if she thought that he, too, was some kind of big cat. 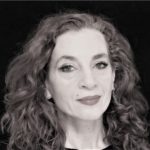 Tal Nitzán is an award winning poet, writer, editor and translator. She published 7 poetry collections, 6 children books and the novel Each and Every Child. Her second novel, The Last Passenger, will be published soon. Her poems have been widely translated and a dozen selections of her poetry were published in translation. Her recent poetry book Atlantis received Bar-Ilan University’s Prize for Poetry. Tal is a founding editor at The Garage, the Israeli National Library’s online literary magazine. 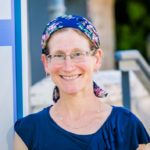 Ilana Kurshan is the author of If All the Seas Were Ink, published by St. Martin’s Press and winner of the Sami Rohr Prize for Jewish Literature.