Translated from the Arabic by Aisha Yassin

My mom and I had crossed the road from the bus station to the only barber shop in the area. Both of us were silent to prevent another of the heated discussions that would regularly take place since I’d moved to the Convent of Nazareth School in Haifa. I would insist and beg and she would refuse, then I would implore and she would curse me, so I’d cry and she would fall quiet.

Being newly divorced, she’d had her share of sins, so she wasn’t in a position for another confrontation with the tribe. What excuse would she find for her girl, who was seduced by the city of Haifa? She agreed even though she wasn’t convinced: either she liked the flavor of rebellion or she hated the taste of surrender.

The road to the barber shop was familiar, but that morning it seemed different.

I turned in the revolving chair to see my braid on the floor, like a snake tempting me to touch it or to crush it. My hand groped at the place of amputation, only to rebound back to its place as if stung. I was overtaken by a horror that almost knocked me from the chair. I glimpsed my mom’s face in the mirror: holding her hand to her mouth, suppressing a deep sigh.

“Here’s your braid” said the barber admiringly. It had fallen to the floor, his scissors announcing another masculine victory… he was aware of the Bedouin mentality in which the braid and virginity are deemed to be equal. But he was more fortunate than the rest of the barbers in the region, since the braid that he’d captured would decoratively frame the wall for many years to come.

I would avoid passing his salon, to spare my soul the agony…

I started sobbing silently as my mom’s menacing looks told me: “Wait till we get home!” I wasn’t shaken by her threats this time, because my mom had been my partner in crime. She had chosen the barber, the day and the time, and her approval, though coerced, spared me certain punishment. My amputated braid cut off a part of my soul, and I suffered in silence. I didn’t dare look in the mirror: my mom’s anger lurked behind me and my bereft head peered from the front.

And Haifa, a treacherous friend who had lured me in and then declared her repentance.

I looked to my jealousy to console me for my loss, and I sought my wilderness to assuage my bereavement… even the pictures of young women with short hair that had always tempted me away from my Bedouinness didn’t justify my sin.

And Haifa…Haifa, how could you abandon me now?

What condolences does an amputated braid give me?

“Oh, you little brat!” my mother used to curse me a thousand times every day… God never had answered and she had never grown tired.

And the barber wouldn’t stop blabbing: “A young woman like you doesn’t need this braid.”

Every morning, I would go down the step that separated the living room (which was also a bedroom) from the kitchen (which was also the bathroom), while my mom stood there, so she could ensure full control of my hair that reached to my back. She could barely collect my hair in one fist: as soon as she pulled it close, a lock would escape her clutch, and she brought the comb to straighten my hair. With each tug at my hair, I swayed in pain, and with every “ouch” that I uttered, her fist became stronger and firmer and I become quiet. She would not let go until she had disciplined my hair into a braid befitting a polite young woman.

“What? Your daughter wants to imitate city girls?” said one of my uncles, trying to warn my mother of the storm that was approaching.

The pupils in the Convent of Nazareth were a mix of city dwellers and nearby village commuters. Each with her own dream and her own motivations. Upon arriving at the school gates, the doors of heaven and hell would open. I would erase my memory of my brother, my mom and myself temporarily. I would deny my eternal “Bedouinness”. My tongue would comply, forgetting its explicit Bedouin dialect.

Only my name and my braid would reveal what I tried to hide. I failed to convince them that I was a descendant of desert kings, and that I had the privilege of bearing my name. The suppressed laughter that tormented my soul. “Sheikha? Hahaha! What does that mean, ‘old woman’?”

My braid – the Bedouin heritage that broke my back. How I had wished for short hair to tickle my neck; its messy tufts flirting around my weary face.

“Are you happy now? You have become like one of Haifa girls. Is that what you wanted? May God show you no mercy…!”

I became a Haifa girl, or I almost did.

I believed that I was, or I almost did, except for the hand that reached for my braid, only to be stung by its absence.

Click HERE to read this work in the original Arabic 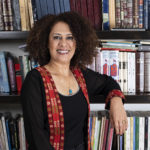 Sheikha Hussein Hlewa was born in 1968 in in Dhayl ‘Araj, an unrecognized Bedouin village near Haifa. She now lives in Jaffa.  Hlewa is a doctoral candidate at Haifa University and is writing her dissertation on the representation of women in Palestinian film. She holds  a master’s degree (with honors) in Arabic Language from Tel Aviv University. She works at the Democratic Institute for Education as the director of educational projects in East Jerusalem. She is a lecturer in Arab Feminism at Oranim College. She has published four collections of short stories and poems, most recently the short story collection The Order C345 (2018). Her work has been translated into English, German, French and Bulgarian. 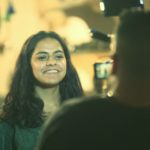 Aisha Yassin is from the Arraba. Aisha in Arabic means “she that lives or is living”, which is quite fitting: Aisha is passionate about poetry, languages, space and food. She blogs at The Little Lantern (thelittlelanternsun.wordpress.com).