The Story of the Tree Bark

There came the summer when people discovered that the old tree was magic somehow. People began taking long drives out to the country, parking their cars on the side of her gravel road. The widowed farm wife watched from her farmhouse as they gathered around, leaned towards the trunk, and began to chew.

Office workers in skirts and delivery men in overalls. Her lawn was now a popular spot for the lunch crowd. Schoolteachers and clerks, lawyers and cooks took turns approaching that old oak. They set their lower teeth around the edge of the bark, and then tore it upwards—that was the way. Gently, gently. Sure, some got splinters, but only if they had been too hasty. Between nibbles they roamed around the tree, their eyes rolled up to show the white underneath, like the eyes of the saints in the paintings at church.

The widowed farm wife set up a card table. “Lemonade – $1,” just as she had done when she was young, back when the local farmworkers clamored for her lemonade. She had enjoyed the attention: Hers was called the most sweet and also the most tart. “Lemonade!” the woman called out now to the city dwellers on her lawn.

The death of her husband gave her permission to act like this, behaving irrationally, embarrassingly. Like a young girl. Selling lemonade at my age, she thought. But still, she excited at the bills piling up in the cigar box.

The bark. The bark. What was the power of the bark?

It wasn’t a high, they told her, but the sensation of goodness. Of rightness. Of “all is well.” An escape, to be sure, because all was not well. All was not good. One woman had a child who’d been kicked out of school; another’s had palsy that left her unable to talk. A husband who drank. An idiot boss. A bleak future, a job they could not endure.

The widowed farm wife didn’t dare try it herself; couldn’t bring herself to do something so silly as chew on a tree.

But here they were, inexplicably, chewing, smiling. They walked barefoot on the grass believing that their lives were better now, as the widowed farm wife poured lemonade into small plastic cups.

Too bad her husband wasn’t here to watch. He would really have gotten a kick out of this. “Of course,” she said to herself, looking out the kitchen window, “it probably would have also driven him crazy.”

The local paper featured a story on the front page: Local Oak Tree Attracts Many This Summer. “Chewing it seems to evoke feelings of nostalgia, according to some. Others claim that it makes their arthritis feel less bothersome,” said the journalist. There was a quote to suggest that the whole thing was weird, very weird. But it also gave the address of her farm, in case others wanted to try it.

There were people camping out now under the tree, curled up like dogs at the feet of their master. It towered above them, patient, dying. The trunk was nearly bare from near the ground to just over six feet. The height they could not reach.

Don’t know how that thing is still standing, exposed like this.

As the bark became sparse, people began searching for other trees. They roamed up the hillside back behind her farmhouse. Like cattle out of their pasture, they grazed new trees, the poplar, the ironwood, the sugar maples on the slopes. Others, adventurous ones, tried chewing trees from nearby parks. But as much as they hoped, no other trees had the same magic as hers. Now the local paper showed a photo of a DNR man wearing a shirt with buttoned pockets, and a look of sad authority. “We don’t know yet if this will spread to other trees. If it does, we could lose one third of our oaks.”

The trend cannot continue. Of course. The trees will all be dead. It cannot last.

One evening she walked down into the yard after the last people had gone home for the day. She stood near the oak and watched the sun set through its thick branches. Just you and me, old thing. You and me. She wondered if the tree felt pain. Was bark like skin? Did it feel the gnashing teeth of these city people? She touched the naked wood. She followed the smooth cambium with her fingertips. What has happened here? How can this all have happened?

He had been such a gentle man. Too decent to be a farmer, his father had said. “You’ve been a good man,” she said, patting his hand as he lay dying, on one of his last days. As his eyes closed, she prayed, “Take him gently. Dear God, take him gently.” It was a prayer. And so he went, one night in his sleep.

One day in September it was over. Not suddenly, like a flood. More gradually, like erosion, but it ended all the same. The bark was gone. And the lesser oaks on the side of the hill, their bark was gone too. The people, disappointed, walked slowly to their cars that afternoon. Just as the sun sets each evening leaving the hillside in darkness, the feeling of delight had left them. They drove back home from the farmyard for the last time. Back home to the son who was caught cheating on his math exam. To the bad plumbing in the basement that was too expensive to fix. To the pains of scoliosis, to the diabetes of their mothers, to pregnant teenage daughters, and roaches under the sink.

The next spring, the woman noticed a shadow on the tips of the branches. New buds. Light green ones. That old oak had somehow survived. And the younger ones too, which should never have been eaten. Behind the house, the other trees were growing and healing. As the days passed the old oak sent out a new gray bark to grow and smooth over the teeth marks, like a bandage around the ankle of an injured runner.

From that summer and thereafter you could see the growth of new bark that reached up to a height of about six feet and then formed a slight ridge.

No one ever tried chewing bark again. But now they were driving out for a different reason, to view that ridge that circled at six feet up the tree. It was like a halo, or like the loop around Saturn, or the high-water mark after the floodwaters have receded. This is how high it got, people would say as they drove past. They came now as tourists to remember and forgive themselves. and to remind each other of the madness, the beautiful mayhem of that calm summer. Of that time of peace. Of that temporary relief. Relief. All along it had been about relief.

So, the card table went back up, and the woman found the cigar box, and it gave her something to do as the days passed, selling them lemonade by the cup, giving directions to the lost, pointing the way back to the highway, and consoling the ones who were sobbing. 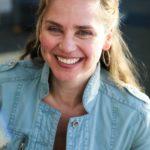 June Melby is the author of My Family and Other Hazards (Holt, 2014), a memoir about her family’s retro 1950s miniature golf course. She tours internationally as a spoken word artist, and her work has appeared in Spank the Carp, Muse, Forklift Ohio, Fugue, McSweeney’s Internet Tendency, Utne Reader, LA Weekly and broadcast on NPR.  http://www.junemelby.com.