Plato in the Present Tense

Plato eats French fries for breakfast down by the river, which is bluer than it’s been in years.

He feeds his leftover fries to the seabirds and washes the salt from his fingers in water that smells only faintly of sewage. Plato hates the smell of sewage but loves running water, so Plato makes contact.

A kayaker cuts a path through the floating chunks of ice in the middle of the river and waves at Plato, who’s too preoccupied by the spirit of the problem to take notice.

The problem of the day is scale, says Plato, wading barefoot through the glassy shore and collecting plankton under his toenails. On the one hand, he says to himself, plankton are small; on the other hand, glaciers are impossibly huge.

Plato closes his eyes for a moment and tries to reach a conclusion, but Plato comes up short.

For one thing it’s just too early in the day for Plato, who’s never been much of a morning person. The problem of scale makes him anxious, and a knot forms in his anus, which Plato can’t stand. Let’s bracket this, he says, and move on to the next problem of the day.

Plato sniffs his wet fingers and says that the problem of the day is water. It doesn’t stick. The plankton under his toenails dry up and he cuts his heel on a broken bottle. Blood doesn’t bother Plato; in fact, he rather likes the reminder. But Plato doesn’t like the pain.

The wind picks up, slapping Plato in the face and drying out his skin. He digs around in his purse for his Coke-flavored ChapStick and applies a generous layer to his lips, even though he knows that doing so is just going to make the problem worse.

Plato makes the problem worse. He feels a little nihilistic now; he can’t stop thinking about chapped lips. His lips are already adjusting their natural moisture production to compensate for the ChapStick; things can only get worse.

The wind pushes Plato around and tousles his hair. Plato, who doesn’t like to be touched, gets pretty upset with the wind. The problem of the day is air, he triumphantly declares, but it goes right over his head. He rubs his lips until they start to bleed, which once again reminds him.

The problem of the day is Plato, he announces, and lets the matter rest.

Seabirds surround Plato. He crumples the greasy bag into a ball and throws it over his shoulder just like he’s seen in the movies. The birds reach prehistoric frenzies. Plato is jealous of prehistory. We can’t all be dinosaurs, says Plato, even if that’s all I ever wanted.

Plato feels bad for littering but then remembers that nothing is redeemable in the end; and then, in the end, there’s the problem of worms.

Plato can see the worms in the mud at his feet. They disappear into their flooded burrows before he can step in them, sucking the seawater back into the mud. Plato wonders if they survive his approach.

Something weighs on Plato’s conscience. He remembers taking a pellet gun and hunting down worms after a rainfall. He remembers starving worms in mason jars. He remembers learning about the environment and how to save it in the first grade, and afterwards adopting a colony of ants he found in the driveway, feeding them white sugar every day after school.

Plato remembers turning the other cheek when the ants discovered the front door, then the kitchen, then the pantry, and then the open box of Plato’s favorite cereal in the world: frosted cornflakes. Plato remembers pouring himself a bowl of frosted cornflakes for breakfast and filling a bowl up with writhing black ants, violating something sacred in Plato, who rushed the bowl outside and melted the ants down with his father’s blowtorch.

The seabirds take flight and Plato, looking up, notices the kayaker waving from amidst the ice. Plato is startled to realize that it’s not a kayaker at all, but some kind of sea monster, something possibly unique in this world, and Plato wishes someone else were there to see it.

Plato squints. He can’t tell if the sea monster is approaching him or simply expanding at a distance, but now he’s scrutinizing the problem quite closely. The world is changing, and things are changing in the world. The problem changes; the problem of the day is change.

Plato plays it cool. If the monster is coming closer, then Plato should run for it—but if the monster is expanding in place at an impossible rate, then Plato is really witnessing something miraculous, and Plato feels that it would be unscientific to turn away from a genuine miracle.

Plato, playing it cool, seriously considers the possibility that he’s witnessing a genuine miracle, and he takes no action. 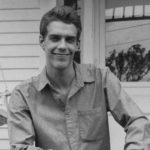 Daniel Uncapher holds an MFA from Notre Dame, where he received the 2018 Sparks Prize. His work has appeared or is forthcoming in Chicago Quarterly Review, Tin House Online, Baltimore Review, Hawai’i Pacific Review, Neon, and others.