I will bring gloves the color of ditch-flowers that you might slide up to the elbows into. And then peel out of, one finger at a time. I don’t mean it; I dreamed it. I am dashing off this missive, I am dashing out the door.  The train shakes my brown paper parcels to the floor. At first, all desolation out the window, all gravel and tin, and then poppies again, their lips and skirts, then back to desolation, its comforting curl of exhaled smoke.  Look, the granary fills, kernel by kernel. I throw open the bath-tap and that exhales, too. I might almost begin to understand the world is round if I keep circling this way. The goldfinch will eat thistle-seeds or nothing and so you grow thistles and so you are visited by those bright darts.

Won’t you take the 9:56 and arrive in time for a bite, a brisk walk during which the starlings may swing close enough to startle, and then we’ll boss each other around for the rest of the afternoon? We won’t agree about anything. Even our melancholia in opposition: mine with its lens dialing down to a pinprick (but not to nothing); yours gone all the way black (but then adorned with nebulas).  I suppose we agree about pearls, the way they lay in the hollows, the way they wrap around a hand. Rough winds displace all darlings, though, settle them where they weren’t. What might happen? Bring a book. We can lay on the lawn; read. You’ll tell me everything, as friends do. It needn’t be exactly true. And I’ll tell you. 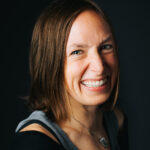