In the Garden Again

That summer the fires ravaged everything, my older sister and I built a swing. We had both moved back to our parents’ house, and I was working from home when she knocked on the door to my childhood bedroom. It’s here, she said, and I followed her downstairs past our brother’s empty bedroom, through the living room, into the kitchen. There sat the box, a head taller than her. She took scissors to the cardboard and sliced precisely, the flaps falling open like a flower blooming. The swing was too big to build inside, so we carried the pieces into the backyard. Not yet noon and the air was riotous, broiling with radiant heat. Above us, the bloated sun pulsating as ash fell, covering the grass in a thin layer of sleet.

Let’s be quick, my sister said, handing me the instructions and a Phillips screwdriver. Our knees burned and itched against the browned grass. We hadn’t heard or seen any birds for the last month. In the front yard, the gutters were lined with plastic litter, charred paper, and carcasses of dehydrated wildlife. Hand me that screw, my sister said, her voice hoarse already. We didn’t have the energy or time to talk. So we didn’t talk through the instructions, passing pieces back and forth quickly, torched batons burning our palms, the metal retaining all that heat. We didn’t talk about our brother, who hadn’t come home during the first fire warning, and who hadn’t even bothered to call after the most recent and final warning. We didn’t talk about the futility of evacuating. We didn’t talk about our parents, alternating between frantic despair and disbelieving catatonia behind their locked bedroom door. We didn’t talk about my sister’s estranged husband, living alone in a trailer out in some valley eastward, whose latest delusion was that the capital G-Government had set these fires, and he was the only one who could stop them if he just concentrated hard enough.

Instead we sisters concentrated harder. Instead I pictured us younger, running through the garden sprinklers and spraying one another with the thick green hose. Instead I tried to discern the flakes of ash from my sister’s greying hair. Instead I tried to be brave. When we finished the swing, the sky had turned into a black oven. We did it, my sister said. It felt good to build something with our hands. We dragged ourselves onto the swing, collapsing against the hot cushioned bench. My sister asked what if this is it—if this is all it comes down to? With what energy we had left, we started pumping our legs. Let’s see how high we can go, I said. Soon we could see over the brick fence. Our neighbors’ backyards were abandoned, overrun by debris and dying weeds.

That summer we had never been so old, and would never be so young again. I looked at my sister, her skin sunburned and peeling. If this was it, I let myself believe there might be relief to come yet if we just swung ourselves higher into the mushroom-capped clouds: yellow dandelions and daisies and bees tending to blushing bushes, June bugs shimmering beneath a porch light, the shocking and wonderful bitterness of a lemon twisted fresh off the neighbor’s tree, a backyard barbeque with the whole family, all of us together marveling at the hummingbirds returning to sugar water, there so briefly—until again it all goes as quickly as a passing brief breeze, an exhausted flame extinguished at last. 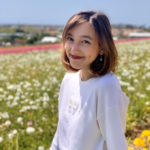 Taylor Leigh Harper’s writing has appeared in LEON Literary Review, SPLASH!, In Parentheses, Oxford Magazine, and elsewhere. She is a contributing writer and curator for a goodmovietowatch. You can find her on twitter @misstaywrites when she is not writing. She lives in Southern California.