The Bench at Zehlendorf Station

There was once a young woman whose skin had started to become clear, like wet paper. Through this semipermeable covering she began to see fat, then words, soon she saw the purple velvet of the vastus lateralis, even some ideas.

Many of the ideas looked like names, some were whole sentences. Under her chin and down her neck she had been noticing memories, but they were lossy, thin. No one ever seemed to notice.

She was sitting on a bench at the Zehlendorf S-Bahn station in Berlin one afternoon when things began to float out. The station seemed ordinary enough, but also far from Berlin, from what Berlin is. There was hardly anyone else around and the buildings were average. The station’s sign used a dark German-looking font on white tiles. She imagined the sign having its bright public moment on some tourist’s profile, then dying deep in the quiet of a phone.

She clutched the handle of her small suitcase. She tightened her grip until the part where the plastic met the metal might cut her palm. With her other hand, she pulled her heavy backpack closer. It was anchored by a notebook, a laptop, and a dress bought on the Ku’Damm.

She hadn’t felt compelled to take a picture in months, but she remembered the feeling. A few weeks ago, there had been a group photo of herself with several colleagues, their arms around each other. They had all bonded for a few months. It was enough to produce presentations, to know each other’s interests, hang out, hook up. Watch them leave. Meet new ones. Take trains to other ancient university towns, punt the Neckar, swim topless in a public lake in midday and find it less interesting than you thought. Eat Haribo for lunch.

The night that last picture was taken, she had seen right through her shin. No one said a thing. She had just dropped off a second hard copy of her thesis at a professor’s house. No one was there, just a box with her name on it.

The inbound S-Bahn would arrive at 3:38 and head to the airport. There was a semester of work waiting stateside, and then, it was unclear. Always unclear. Life had been diced up this way, into semesters, declined nouns, orange slices, crumpled swim-suit tops never admired, passports. There was always some internship. Always some kind of family for two years. Or half a year.

But then, airports would always erase the bond. Bright terminals had started to feel more real than old cities, more important than even nineteenth-century spiral banisters ascending the dark spine of an apartment building. The apartment building where she had been living for the last year was the color of marzipan. The bottom third of it was pink and the top was mint green. Inside, on the third floor, lived someone she had always been on the brink of speaking to, but never did.

On the top floor was an old skylight with a missing pane. The building often filled with weather. A diamond string of rain once fell all the way down.

It was 3:29 pm and the train would be coming soon. She opened her notebook and tried to describe the building. She did not want to forget it, and she had recently begun to remember how much she had forgotten about being here. So, she began with a list: the address of the building, the number of floors. She began to add the man on the third floor. She sketched the shape of the building, the window, the dark wood and iron banister.

The other scholars wouldn’t do this, of course. The notebook was for a class. It was a class in which she had excelled. A student should pursue whatever they excel in, it had often been said. Or had it ever been said. She paused her pen and thought, maybe she should decline verbs.

She put her pen back to the page and wrote that the third-floor man’s beard was black, and one day he trimmed it. It had been raining, and they were passing each other on the stairs— him climbing up with a box of oranges and glass-bottled water— her descending for a class. Her whole face was wide-eyed at the sudden handsomeness. He grinned, knowing. In that moment she felt like they had become a couple. A small funnel of sun found the bottles in his box. The green curve of the glass glinted back: their wedding. At the cart outside, she bought an orange and ate it, ravenous. Maybe they were both eating oranges at the same time from the same source: their honeymoon.

It was 3:38 pm, and her train quietly, efficiently, glided into place.

She finished adding texture to the peel of the orange, making light, tiny pockmarks in the sphere she had just drawn.

Under the drawing of oranges was the back cover of the notebook, under that was the final draft of her thesis, serving as a desk. Under her thesis were her thighs. She looked. Words in the marrow were showing space between the letters. Some had lost their s and become singular. She could already see the white knob of her lateral epicondyle. The doors to the train slid open.

Ideas were floating up from her body in whole sentences now. One was the complete argument about the nature of individuals in an infinite plenum. The conclusion bobbed in the air like a balloon. The string of premises was anchored low around the coccyx, but she was no longer sitting. It drifted away.

The tiniest breeze became slightly more. The page from her notebook flapped, but held steady to its spine. She turned to the next page and added more. She made a score of five lines in narrow rule and added a bass clef.

Her inbound 3:38 train shrunk northwards. Her hair lifted in its wake. Since she did not know anything more about musical composition, she made a list of the hardware features in her building: knobs and latches, hinges from previous centuries. She sketched the plastic mop bucket kept under the staircase. She drew his bike.

For a while, nothing floated.

She wrote down the look of the entrance hall of the Humboldt library: oddly bookless, a hive of dark wood. She drew herself: back-floating on the Müggelsee, in the dress from the Ku’Damm.

The skin over her wrist wrapped over the bones again, covering the delicate branches within the hand, showing finally the familiar pair of freckles that had always been there on the skin between her thumb and her palm.

She wrote the names of the streets she had to take, in order to walk from the marzipan-colored building to the market. She sketched out a declination in the active voice of the verb to eat, but only for the love of eating. She filled the pages with studies of her bed, drawing it from every possible perspective.

Her arms, her legs, were soon nearly complete sheathes again for blank bones and tendons. Another train came, opened its side, closed, glided. She turned the page and wrote about a recent afternoon. She had been laughing so hard— her sister had just texted her from the States. She was cracking up, loud and hugely like Americans do, standing by the pink building’s overflowing bike racks and tidy recycling bins.

The man with the black beard had been there too, sorting his non-corrugated cardstock. He glanced over, smiling. Then he headed to the bin for aluminum and looked at her again, giggling. They were contagious with it. She smiled back and watched him disappear into the pink building. She had thought about texting something about it to her sister, but didn’t.

She knew his schedule. He would be home at 19 Uhr. One can easily avoid the airport by transferring toward Südstern. She packed up her book, admired the old scar on the back of her calf, admired her whole body, full and opaque. By herself, in the dusk, she laughed out loud. Her ribs were warmed by it. Her cheeks were pushed back, then they settled. Her eyelids felt efficient against the wind. 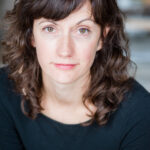 Molly Sturdevant is a Pushcart-nominated author of multiple short stories and poems. Her writing has appeared in Dark Mountain, Orion Magazine, SunDog Lit, X-R-A-Y Lit Mag, The Nashville Review, The Midwest Review, Newfound, Driftwood Press, and many other places. She is an assistant prose poetry editor at Pithead Chapel and a reader for The Maine Review. She lives in the Midwest, and is working on a novel.