A Slab Is Confidential

The Lajes Base is a form with substructures,
maintained walls, survivors of collapse.

What is the half-life of quiet memory,
of a Portuguese guard in American detachment.

What is a nuclear code of conduct
to the shuttered Cabrito magazine.

The trucks were covered, and the people
around the truck covered their bodies
with rubber, covered with respirators their faces:
a strange fantasy of astronauts’ arrival
in a toxic environment, but a short distance
from towns, beds, the young covered
in sheets in the dark they trust to have fallen still.

What is a cover here.

Claim that the U.S. military stored radioactive waste on Terceira Island for many years.

Try to evaluate the limits of a claim. Expose it to radioactivity. Does it metastasize?

Or, in fact, does it just die an unknown figure of speech?

Had the identification of place come with a nuclear symbol, would it be said at all.

If a fence is old, that means
there are many whispered
stories about what’s inside.

I remember a rumor about
ghosts—after all, this is
a child’s theory—what else
did I have to share.

We knew stray dogs
were thrown off a cliff
right into the ocean
by the soldiers.

We knew things
could be erased
and also leave its shape.

Photographs can show us
the bunkers have existed,
have stood tens of meters long.

Officially, a photograph can
only reveal that which is
enveloped in the light of a place.

In Cabrito a nuclear symbol was formed
over a TOP SECRET document,
and the rays fell out and into the earth.

We are never allowed to enter there.

Even the rinse of breath fails in this space, endless fogging.

If you don’t let people in at all, that gives you the flexibility to sometimes stockpile nuclear weapons and sometimes not.

If you note when silence first appears you can know the presence of a nuclear logic.

There are ways we learn to see
what is alive in the dark—we bend,
for example, to listen—we mirror
secretive movement,
a squid at maximum depth.

Here is a device to show
the navigation of ghosts.

We watch as, for years,
Americans are very attentive
to the health of the Portuguese
who guarded the magazines.

We wait for results as they are
subjected to monthly blood tests.

A land may form, pulled kicking
from our endless mistake of arrival,
a land completely panicked
and belching something awful.

We may find that what creates all this
concern is heavy metals and the fear
of a soviet state, and then reply, “This is
way above my pay level and I can’t
comment on it,” as if being the one who
asked for it is all we can afford of blame.

We may just measure the shiver
that remained to shake us off.

A land I worked four years
with the feet of a child
leeched itself up through
each separation of matter
in the flesh of my body,
and I am well water not even
boiling could rid of its elements.

I speak and cough up everything
with sand and pumice and
the long growth of haze.

Scattered over a place, we are installations,
crucial munitions posts for a fleet of huge lungs.

Breath is a more or less obscure purpose for destruction—
so are a Navy’s bombs and torpedoes stored in a field.

So has the Cabrito magazine breathed like a fleshy body
and sighed its sick into the island’s center.

Note: In writing this work, I used a method of homophonic translation which relies on the re-sounding of a source text, letter by letter, according to the various possible sounds each letter is able to produce (ex: “cat” may become “ash” by silencing the ‘c’ as in “indict,” and by sounding the ‘t’ as an ‘sh-‘ sound, as in “ratio”). The source text for this poem was an English translation of the 2018 article “Lajes Confidencial”, an investigative report by Rolando Santos of TVI 24, a Portuguese cable news network, about investigations into the presence of and possible contamination from nuclear waste in an American military bunker on Terceira Island, in the Azores, during the Cold War and up through the 1990s. The title is a homophonic translation of the phrase “Slabs Confidential,” which is the literal translation of the Portuguese title. 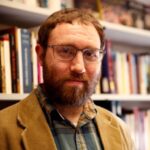 Ryan Clark is obsessed with puns and writes his poems using a unique method of homophonic translation. He is the author of How I Pitched the First Curve (Lit Fest Press) and Arizona SB 1070: An Act (Downstate Legacies), and his poetry has recently appeared in such journals as Barzakh, DIAGRAM, Posit, and Fourteen Hills. He currently teaches creative writing at Waldorf University in Iowa.