My eight-year-old opened his palm. I screamed. Inside was an ugly little thing, bald, screeching, half-blind, nearly dead. He insisted we keep it.

It’s brood parasitism, he explained on our walk home. A cowbird will lay her egg inside a sparrow’s nest. The cowbird chick hatches mean and hungry. It wants no competition from the baby sparrows and throws them from the nest.

“And quite frankly,” my son said, “I just don’t think that’s fair.”

“Where did you learn these things?” I asked. He shrugged.

The sparrow didn’t struggle in his hand. He held it up in the sunlight, examining close with one eye, a jeweler appraising a fine diamond.

“I will name her Diana,” he announced.

He thrust his tiny palm towards me. Bulging grey eyes, yellow beak, both gaping wide inches from my face.

“Oh please. Girls are the prettiest thing in the world.”

I wanted to say more, but I knew he wouldn’t listen.

The bird consumed his full attention. I didn’t think a little kid could keep anything alive. I feared the sparrow would be rotting in a shoebox within a week. But he fed her earthworms with tweezers and water through a pipette, and she grew plump in his care. Thin feathers sprouted along her shoulders, her back. Her timid squawks became demands.

Over weeks, the shoebox she lived in transformed into a penthouse. Magazine cut-outs as fine art decals, flowers glued in every corner, popsicle-stick furniture.

I inspected the bird lying still in one corner, drawing shallow breaths.

“How do you know she loves it?” I asked.

He rolled his eyes. “Just look at her little face. She’s burning with happiness.”

I inspected the sparrow. Her beak, still baby-bird big, curved down into a frown. She pulled her neck in under my gaze.

“When do you think she’ll start flying?”

“You know you’re gonna have to let her go when she starts flying.” He didn’t respond.

Then began the costumes. Scraps of felt glued into elf smocks, tiny tutus fashioned from old scrunchies, jewelry woven from dental floss. She moved around more now, her legs stronger, more confident, and she ran from his hands and their garments. But the boy was faster, trapping her between three fingers and sliding on little pantalons and sun hats as she struggled in his grip. Once, she bit so hard she drew blood.

“See, I don’t really think she likes you doing all that stuff,” I told him, wrapping a fresh-band aid around his finger.

But he continued on, constructing ever-more elaborate outfits, ball gowns with tiaras, sports jerseys, even a track suit. He paraded her around the house, around the neighborhood, holding her inside of a mitten and letting other kids take peeks.

She almost flew away. It was the softest crash from the kitchen. I came in from the other room, scooped her off the floor. My son had left her shoebox unattended in the usual spot atop the kitchen table.

He appeared with a doll-sized dress made from some burgundy, velvety material. I didn’t even want to begin guessing what he’d cut up to make it.

“Sorry, ma. I was busy making this.” He held up the dress. “And look, it’s gonna go so nicely with this ribbon.”

“I don’t want you leaving the bird alone here. She’s starting to fly, and I don’t need her running into the window, or getting caught anywhere. I think it’s best if you let her go free, sooner rather than later.”

“Okay.” He sighed. “Let me just see how this dress looks on her first.”

Half an hour later, I returned to the kitchen, finding the shoebox abandoned again.

“What did I just say about leaving the bird unattended?” I yelled. He was away somewhere, he didn’t come.

I looked inside the box, hoping the bird didn’t escape while unsupervised. She was in there, her tiny body drowning in all that red fabric. She was much too still. It was the ribbon around her neck, I realized, tied a bit too tight. He was right though, it did go quite nicely with the dress. 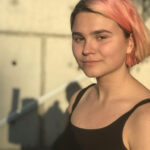 Masha Kurbatova is 20 years old, from Decatur, GA, in the U.S. She is a sophomore studying Written Arts and Environmental & Urban Studies at Bard College. She is interested in short fiction and its ability to deliver sharp imagery and poignant sensations in brief spans of time.