I. When he spoke speaking, the volume louder, the sound larger, he fired – firing straight into the eyes, not between them, the eyes. Early and before and the opposite of later, he lays down, and I next to him, laying down, Foster the People is playing on the radio, making noise through the stereo, playing (it’s that song “Sit Next to Me”, where the singer is telling the ‘you’ to come over there and sit next to him, in the song, that is playing, when he lays down, and I lay down next to him). We go out, and we leave, and we plan to return by leaving laundry unfinished, we go out and we get sushi, we eat raw fish, called sushi, that we buy from the grocery store, that sells groceries, and we eat it in the car, which he drove there, to the grocery store, by driving it. His hand on my thigh, my thigh under his hand.

II. I give him all of it, all that is, everything, each thing, every item, every single thing, the whole lot, the entirety, the total, the aggregate, the whole shebang, the whole nine yards, the whole kit and caboodle – everything but the kitchen sink, and even that, I give him, by giving him everything, the kitchen sink. I run away, running, not because I want to but because I run, and running is done by running. I wake up, itching, bites like fleas’ mark my neck. The bed is warm, it is not cold, the bed has another person, and because of that the bed is warm. I fool myself sometimes, by fooling myself, and sometimes I fool him, by fooling him, and sometimes I fool the both of us, which actually means I fool neither.

III. The world is a chewable piece of candy, because when I put it between my teeth and bite down (chew), my teeth leave marks in it, the marks stay, put, down, there, marked. When you laugh a laugh I flood a flood, and everything is visible, through my glass face, because my face is transparent, and glass can also be transparent as it often is, because you can see through it, it exists but it doesn’t, it exists only in certain light, or when something touches it. You can kill, by taking a life, by killing a life, when you kill it. You can fool, by fooling, by being fool, by making fool into a verb that means not only to fool but to perform foolishness. To fool – to act foolishly. You can take the boy out of the country, sure. You can do that. Make your bed, lay the boy down, listen as he speaks, by talking, by speaking in words. 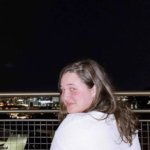 Constance von Igel de Mello is a German-Brazilian writer from São Paulo, Brazil. She graduated with a degree in Cultural Studies and Gender Studies from the Humboldt-University of Berlin, Germany, in 2020, and is currently pursuing her MA in English and MFA in Creative Writing from Chapman University. She writes for the Medium publications Fearless She Wrote and The Ascent, often focusing on the challenges and euphorias of the migratory background that permeates her life.