Spread across the dining room table, the newspaper is dissected, absorbed, and devoured voraciously. This rag, running necklaces of dirty type that smudges fingertips, this dirty Herald, the only touchstone with the world outside Bloomsbury Square. Today the paper tantalizes with a headline on a comet streaking through the southern hemisphere; one slice of an onion-thin page and there it is, an artist’s sad rendering that accompanies the story of the Great Meteor shower of 1922, first seen in Cordoba, Argentina.

Over wire-rimmed glasses, Virginia Woolf peers down at the drawing, takes in the words, breathes in an imagined Argentinian starry sky.

By the 12th December—the paper informs her—the nucleus had all but disappeared but the long tail retained a bright viscosity that shot through the wintry sky near Princeton, New Jersey, its breathless magnitude an estimated 140,000,000 miles long and still visible to the naked eye. That said, the storywriter concludes spitefully, “It is very doubtful whether people generally would know anything about the occurrence until they read of it in the papers.”

Were she so inclined, she would track down the writer and slit his miserable throat just for that attitudinal prose alone. Fortunately, it is in her practical nature to reserve homicidal urges (imaginative, of course) for matters of a more pressing nature—most recently, an unknown and heinously boring writer who had shunned the press after Leonard declined his manuscript, and thus, her imagination rushed him to an early grave – a razor blade to the throat perhaps, a body slumped in an unmarked grave wrapped in a Persian rug – perhaps the very rug she’d had Nelly send out for just the other day, which had been delivered two hours early, and she herself had had to see in the delivery men.

There is the chink of glass against glass, somebody is pouring her another drink, and Virginia reclines back in her chair, happy to allow the conversation to continue around her. She is back in the room, present again, a flurry of fire-lit faces unaware that she had ever left. She sweeps a thumb across inky fingertips and crowns a drawing of Tutankhamen on the opposite fold on the paper with her discarded glasses, which distort a thick spray of stars in a farsighted lens. She fixes her expression just over Leonard’s shoulder, to the window – she looks into the winter evening. All that is visible are shadows from the dim light of other buildings, other rooms, gaslights along the street, and beyond that, the eternal vault of the city that harbours so many of her dreams. For long hours the dreary, muddy, rainy winter stays encapsulated in darkness; winters are different here than they are in Rodmell. Even after everything that has happened, she still thinks of London as home. She still thinks of returning. But there is no undoing the past, no returning from Rodmell to here—the precarious edge of the world, where this strange city captures voices unknown to Mr. Bell’s invitation of a dinner party, where the abstraction of the waves of imagination always fit, painful and unerring, in the form of a novel, an essay, a word on the tip of her tongue – a story that takes flight mid stride down a street fuelled and chased by everybody else’s conversation.

How exciting other people were.

She had become lost again, a train of thought abruptly derailed by the door opening, a great oak of a door, creaking on its hinges, and she was back in the room for the second time, transfixed by the sudden entrance of another woman, the conversation, she realised, having taken a rather alarming turn, and Vanessa, blushing, was clutching Lytton’s arm in mock dismay.

“You can either become an actress or a whore,” Clive was saying, though the subject of conversation was lost on her. Then the damning line, aimed at Vanessa: “I’d say the latter, as your acting in the bedroom has always proved a mastery of your performance.”

Somehow, Virginia is neither shocked nor offended, neither does she look across at her sister, Vanessa, who she knows very well will be sinking herself into Duncan Grant’s shoulder, much to Lytton’s despair. She hears Clive’s usual demanding rap upon the table, following, what he thought was a comment of great hilarity, followed by the shoulder-hunched uxoriousness of his posture, as if in the time between the knock and the opening of the door he thinks better of his behaviour, and suddenly, once again, he is in love.

“Who is that?” It’s Dorothy that speaks after what appears to be a considerable amount of time, and Virginia wonderers if she had somehow seen the door open even before it had.

“Mrs Harold Nicholson”, “Lady Sackville-West”, “The Right Honourable…” Whispers pass between the glasses, and Clive stands, chair legs grating fiercely on the flagstone floor, and opens his arms to welcome the late guest.

She shines with a candle lit radiance, stalking on legs like beech trees, pink glowing, grape clustered, pearl hung. Lytton pulls a chair from the table with the lavish gesture of the half-drunk, and Roger Fry pours wine into her glass as she comments on the décor, touches the fine satin of the curtain, as marvellous as what lies between a woman’s legs, and says, “Virginia Woolf,” slowly, as though she were reading her name for the first time whilst tracing a finger along the spine of Mrs Dalloway, and finally Virginia sees her face in the light, plain, handsome, dark eyes burning as if she were coming out of a fevered dream. Virginia is no romantic, but she imagines her own eyes in response, the perihelion—the blazing comet at its closest point to the sun, so dazzlingly close to immolation—to be this elusive shade of blue, cool and hot at once.

And then, before Virginia can respond, Vita is caught up unexpectedly by E.M Forster, who, sitting to her left, encompasses Vita and her attention halfway through a sentence. And then, seamlessly, she is laughing, charming, taking the floor, immediately the highlight of the evening, her being in short (what Virginia had never been) a real woman, and Virginia is left to push her wine glass half an inch further away, leaving a half-moon of condensation on the table, a puddle reflecting the fluttering caprices of the fires waxes and wanes. She feels heat rising within herself, not unlike the heat of the fire itself, only this heat is inside her, and she knows without looking up that Vita is watching her, in between conversational pauses, so, instead, she turns to her right, to Desmond MacCarthy, a man in mid-rant, who points dramatically at John Maynard-Keynes, dark eyes threaded with fine lines of bloodshot, an embroidery of failure and gin. “I trust you’ve made overtures to the fellow?” he inquires. “Suggest that he leave the premises?”

Desmond snorts a laugh through his nose and gestures with an empty glass. “Suggestions, overt, subtle, and all gradations in between, have been felicitously extended.” And John declares that he should be “throw him to the wolves,” which Virginia mishears as the waves, a thought which rolls in, and rolls back with the suddenness of yet more snorted derision from Desmond, and again, Virginia finds herself between half-heard conversation, and, whether deliberate or not, her gaze about the table wanders hand-in-hand with her mind, catches the rise of Vita’s fingers to her lips to conceal a smile that reveals, despite this glamour, grape clusters and pearl necklaces, that there is something loose fitting.

She reaches again for the wine glass, blurs the crescent moon of firelight on the table, and sips the warmth of it, and, like the waves of the sea, the wine consecrates the past in a dreamlike sheen, in memories blurred and comforting, the real and the imaginary indistinguishable in a fragmentary nocturne. For a moment she closes her eyes, imagines the bottom of the sea. Then, with a sigh, rouses herself. Her imagination lifts up its skirts and tiptoes back to life: the clinking of glasses, the slapping of cards on the table, and the gentle murmur of a piano she had never realised was being played. 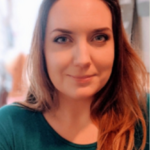 Raised simultaneously by David Bowie and Virginia Woolf, Natascha Graham writes fiction, non-fiction and poetry, as well as writing for stage and screen. She lives with her wife in a house full of sunshine on the east coast of England. Her play How She Kills was performed by The Mercury Theatre in August 2020 and broadcast on BBC radio in September. Her second play, Confessions: The Hours, has been performed by Thornhill Theatre London, and both have been selected by Pinewood Studios and Lift-Off Sessions as part of their First Time Filmmakers Festival 2020. Her poetry, fiction and non-fiction essays have been previously published by Acumen, Litro, Flash Fiction Magazine, The Gay and Lesbian Review, Yahoo News and The Mighty.