When a Cloud Is Not an Orange

In the book I had just read to Owen,
he marveled at a tree animals used

as a library,
and now he is climbing

in his pre-school’s courtyard,
attached to the synagogue

where every year he learns his name
has been inscribed in the book of life,

orange-picking.
I have been so disconnected

from the natural world
I didn’t realize oranges start green.

Most things start green.
But not clouds. My son’s mind

takes on the many aspects
of the cloud; he is telling me

Then he tells me “respect
means practicing good manners

so G-d doesn’t stay away,”
and I wonder if I missed something,

looking at the clouds, thinking
the oranges should taste orange,

shouldn’t they? Owen climbs
higher to pick another,

he has yet to be convinced
that his senses can disagree,

can be wanting. I don’t care
if a book is a kind of simulation,

more porous than I ever
would have guessed.

“Orange!” Owen says,
over and over,

willing the green to shift
before his eyes. 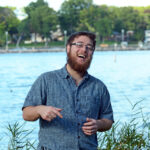 Joshua Gottlieb-Miller is a PhD candidate in poetry at the University of Houston. His writing can be found most recently in Grist, Talking Writing, Rattle, Brooklyn Rail, Berru Poetry Series, and Miracle Monocle. Currently Joshua tutors in a Writing Center, is a weekend desk attendant for The Menil Collection, and teaches a senior memoir workshop for Inprint at the Jewish Community Center. Joshua lives in Houston with his wife, Lauren, and son, Owen.