Evenings, Major Thumb would whistle his way over to Clara’s caravan. In the quiet, sweet blue night she sat outside waiting and counting stars. His hair was the orange of a late summer sunset.

“I’m yours,” she said, confirming ownership by kissing the tip of his dinky chin.
He often presented her with a cupcake or a box of M&Ms. Clara, who wore black mother-of-pearls on her torso that ended right below the waist, would do things with her arms and hands that would make him whole.

Afterwards he would hold her and sometimes tell her stories about his previous carnival, how they made him handle snakes even though he wasn’t trained for it and was rescued just in the nick of time.

After he left her caravan, crickets hummed jazz into the night.

The unnecessary appendages of a sister

Elizabeth plucked limbs from beetles in front of Clara. “I’d like to see one of them pull a Houdini,” she said.

She had a dishevelled, normal body and sometimes she danced naked in front of the mirror as Clara tried to brace herself in the corner of the living room, feeling dizzy from the waves of her sister’s movements. She wasn’t jealous of her sister’s legs or her moods, not for a minute.

“You have a perfectly shaped but shortened body, poor thing,” her sister said, as if it were news. She ran her fingers through Clara’s hair, as if testing the silk on a ruined scarf.

Clara and Major Thumb sometimes went for walks while other artists were asleep and no one could whistle or make a fuss about them. Clara walked by swinging her arms, her hands like very strong legs. Abbreviated, she was taller than him.

One night they wandered away from artificial lights because the newspaper predicted there would be meteor showers. Thumb took his spectacles off as he stretched his neck toward the glassy stars.

“Do you see that little wink up there? It’s the Perseus constellation. Her brightest star is called Mirfak, which means elbow in Arabic,” he said, holding Clara tightly by the elbow.

Major Thumb told her about a carny, a handsome and regular guy who hated his features so much he tried to cut them off. “Maybe he felt like Mr. Potato Head,” Clara said.

She noticed the way regular people like her sister struggled with self-worth.

She remembered the dullness about her sister’s eyes and the blue TV light she stared at so worshipfully, as one might stare at that God of nothingness for an entire life.

Major Thumb found a bag of drowned kittens in a stream and hauled it over to Clara. Only one of them was still breathing. The kitten resembled a half-shaped creature, its head much larger than its small body. Clara narrowed her eyes at the animal and told Thumb to name it for her, there was barely a pulse.

“I think we should call it Hinky,” he said, “it’s had a hinky life so far.”
She watched Thumb’s eyes flicker beneath small hooded lids.
“I’ve never missed my legs,” Clara said, meaning it.
“I’ve never missed them either,” Thumb said, having forgotten that she didn’t have them. 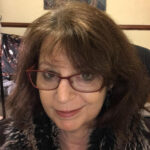 Meg Pokrass is the author of eight flash fiction collections, an award-winning collection of prose poetry,  two novellas-in-flash and a forthcoming collection of microfiction, Spinning to Mars, recipient of the Blue Light Book Award in 2020. Her work has appeared in hundreds of literary magazines including Electric Literature, Washington Square Review, Waxwing, Smokelong Quarterly, McSweeney’s has been anthologized in New Micro (W.W. Norton & Co., 2018), Flash Fiction International (W.W. Norton & Co., 2015) and The Best Small Fictions 2018 and 2019. She serves as Founding Co-Editor, along with Gary Fincke, of Best Microfiction. Find out more at megpokrass.com.