I’ve been held at gunpoint by children
——–before and at least their hands
shook and their eyes were—-alive
——–maybe just adrenaline—-but still
pooled light through which something
——–flit—-minnows—-bluegills
ponderous carp—-(my own kid has
——–sad manatees swimming)
but this kid’s eyes are like looking up
——–through an algae bloom from
the bottom of the pond—-and christ
——–at an adult’s raised voice
that wasn’t very nice—-leave the littlest
——–alone—-I’ve told you twice
not even a ripple—-This kid just
——–looks at me and hisses
who do you think you are? as he licks
——–an ice cream cone that doesn’t
deign to drip—-because he knows
——–I know—-soon his shadow
cocked over my crooked form—-as I lie
——–at the bottom of a country pond.

The Twentieth Century writes a cento*

The sun’s rays do not burn until brought into focus,
bringing the particles of an atom into vibration
with wild thyme unseen, or the winter lightning,

or an empty cup, a flight of uncarpeted stairs.
If I could remember the names of these particles
between us, voiceless as uncoiled shells,

dark and denser, always further away—
but I have no special talent. I am only
a physicist, an atom’s way of looking at itself,

its own way of making people disappear.
With the lights out, it’s less dangerous—
I shut my eyes and all the world drops dead. 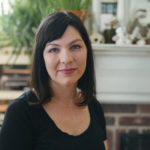 Shelley Puhak’s work has appeared in The Atlantic, The Iowa Review, North American Review, and Verse Daily. She is the author of two books of poetry, the more recent of which is Guinevere in Baltimore (2013), winner of the Hecht Prize.