It takes to the sky like a rising shatter, like a drunk at dawn,
mouth stuffed with winter sparrows, inevitable incisors
needling every bright and limping promise.

As if return weren’t already hammered to your damaged
muscles. As if you weren’t just a constellation of aches,
a catastrophe of ice

and unreliable rivers. As if your howl
might leave anything but a spreading bruise,
another counterclockwise fading.

Dress it in blue shadows anyway—this new year,
aortal child of lace and metal, its wayward flickering.
It’s fateful as a fleeing herd. Watch it silhouette

the dusk-brown field. No grass or milk here behind the barricades,
but feed it roses and it will swell like a calf, overgrown vision
with the heart of a dog, lumbering mucus-mouthed
dumb and sweet as flannel.

It eats whatever you plant: branches, handcuffs, hammers,
the lucid dead. Then matchsticks, candles, gasoline,
blood orange. You count each bite as it swallows.

NPR is playing in my back pocket, has been all morning
as I bend and crawl, clawing pigweed and purslane and thistle,
tearing yellowed, mildewed leaves from the tomatoes.
Black spots on some and brittled brown as insect shells on a windowsill.
I worry about blight, never know if it’s safe to compost the trimmings.
All that heat will fester disease, keep it warm through the winter
until it comes back stronger next year. The news commentators
are so careful with their words, I wonder if they fear the same:
Alt-right, white nationalist, they say. Never white supremacy, neo-Nazis, KKK.
I wipe my hands off on the ass of my jeans, bundle a clutch of cucumbers
into the gray billow of my T-shirt. My fingernails are gaumed up with dirt,
slug slime, the green juice the tomato vines bleed
when you rip them at the stem—sticky-tack stubborn as tobacco spit.
Back in the kitchen, earth crusts freshly-split hangnails I peel
then watch as they trickle bright into muddy sink-water.
Scrub each finger three times with the potato brush.
From my back pocket a clip of the crowd, now rhythmic with frenzy,
torches in their fists as they chant: Blood and soil. Blood and soil.
Each word is spit-shined, each word drops a black boot into my stomach,
a familiar unfamiliar chill. Blood and soil: what I’m washing from my hands
right now, this garden I’ve spent all morning in, this land I’ve worked to bone
and cracked palm. I’ve bled into the mud and the mud has bled into
my skin, has laid rows of tiny scars like a language I still carry
in my flesh though I’ve forgotten how to speak it. Before this land was mine
it was someone else’s, and when I die it will be someone else’s again—
a cycle as fixed as seasons, as deep as this clay and ledge.
At fifteen my great-grandmother sang alphabets of departure
as she and her sisters filled suitcases, as they folded and pressed.
Her family worked a farm in the Ukraine, but I’m told it wasn’t theirs,
they weren’t allowed to own land. Blood: what’s matted into
the young man’s cornrows after he’s beaten with metal poles
in a parking garage. Soil: the bowels release involuntarily
when you die. The car plows through bodies like a tractor through
a wheat field, reaps another harvest of blood. They left their land
for the city, they left the city for the sea. On the radio, another
young man is stating his three reasons for attending the rally,
and the third is: Kill as many Jews as possible. Sew the same crop
year after year and the soil will starve, the plants grow thin and sallow—
blister and shrivel until there’s nothing to left harvest, nothing to eat.
I can’t read the language on the forged passports nor recognize
a single face in photographs. I don’t even know my great-grandmother’s
real name. But the taste of earth is on my lips. The soil maps
a dirt-slicked path across my palm. From my kitchen window, I see
horizon stitch a ghost-bleach sky, see it beckon with its long gray scar
from that farm in Kozowa to mine in Maine—as those who fled
to bring me here once stood on ship decks and watched their land unfurl
into blurred shorelines, their bodies slacking and cinching, now empty
as flour sacks, now tight as a fistful of stones.

The potatoes freeze in the bucket and we forget
to touch hands. For weeks I am a pit blizzard,
my mood always detached. Snow coats the ice
but barely. One morning you find the one-eyed bird

dead in his cage. You put him in a shoebox, leave
the box by the foot of our bed. We press our faces
to the crooked attic window, sun crumbling
toward the horizon, a pulverized wafer—

we imagine chewing the sky, skinning
the evening with our teeth. Of course the dead
send a letter daily; they march exhausted across
the frozen paper, frail and complaining

of boiled porridge, breathless with agony, hungry
enough to lick the iron-grated moon. Some eat dogs,
or so they say. It’s an easier thing to believe than
miracles. These days we’re uncombed, disoriented—

each night another fleeing premonition enters
our dreams. Another killing harvest, another wounded
frost. I sway off-kilter in the barn doorway
like a stolen lantern. There’s a drunken fever dark

in my chest—a rage that’s beginning to feel like home.
Parched and glowering for a saucer of milk, it recites
poetry in grandmother’s forgotten language,
then bites all the bed sheets to rags. 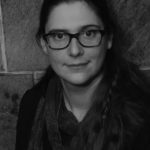 Julia Bouwsma is the author of two poetry collections: Midden (Fordham University Press, 2018), and the Maine Literary Award winner, Work by Bloodlight (Cider Press Review, 2017). She lives off-the-grid in the mountains of western Maine, where she is a poet, farmer, freelance editor, critic, and small-town librarian.

Back to Table of  Contents