1.
I’m walking with Adrian outside the school.  The wind
is hot diesel, and when he stretches his arms into it, bends
his head low and to the side, he is swaddled in the white
fabric of his shirt, ribs showing through. The sun,
shuffling off the tilted horizon, burns a corona
behind him.  We are searching at a crossroads
for the backpack he ditched to outpace
the truancy officer. It’s almost time
for lunch and he’s in a hurry to get back
but walking loose, laughing. Before the last
lunch line closes, and he flashes dimples
at the lady handing him carrot sticks and juice,
I manage to talk him into a uniform shirt and out
of the palette of sharpies and spray cans that
have been rattling in the bag the whole way
back: green and orange like ivy and marigolds
in the school garden, black like his mother’s hair,
blue like the sea off the pier, and red.

2.
Outside the bank tower, the city is a medallion
of blinding silver.  They’re dressed in Sunday clothes,
hair combed and braided, speaking in low tones.  A lull
in the tour, one kid asks what it is
to be the sky. I walk through the glass
walls and turnstile doors. They wait in the street,
unable to make a such jump, watch me as I greet
the woman behind the counter, unwilling
to tear her eyes from them even as I speak
to her.  She shakes her head, no.  She is steel
and we are molten.

3.
The third skyscraper lets us in. There’s fifteen
of us packing the Red Tower elevator, noses
to the panes.  And we’re riding it like the old basket
at Knott’s, wailing in wobbly freefall, bumping
and gasping, grasping for balance, eyes
watering against the rush of concrete, again
and again: rise, suspend, fall. In that final lift above the city,
through the thick and ambered glass, I am counting
bridges from Frogtown to the Rolling 90’s, noting us
amid the vast artery of strangers in colored caravan,
stilled by the engineers who keep us here, in
ourselves.  Adrian taps my shoulder, says he’s never
seen anything so beautiful, points to a mural of a woman
weeping and wipes his face on his sleeve. We tumble,
at the chime, into the lobby, at the feet of light-haired men
in dark suits.

4.
Before I can think, I’ve slammed my forearm
into Adrian’s chest and rushed him against
the wall.  He’s wailing over my shoulder.  I’ve
locked him behind me, turned my face toward
the grown men watching a boy twice his size
move toward us. I scream. I order it cleared.
I will give my body for this. His fists pound
the building behind him, jagged and cutting,
the rack of it a percussion into both our skin
as if bruises were a pigment the fall forgets. He beats
his chest, the wall, grabs handfuls of his own hair
and I’m looking into his face, calling him back
to me. Once the patio’s still, we slide side by side
down the bricks. The maple tree in the courtyard
lets loose her leaves against the asphalt,
and I know he let me do this.

5.
Below the bridges of this city: 6th Street, the cliffs at
Elysian, that high corner where I keep my heart,
I search for signs of him. Over the years, we’ve scrubbed
enough graffiti that he’s unmistakable:
a caricature of a saint whose eyes spark medieval
whose skin is a canvas of names. I saw him do it once,
by accident on an evening walk, and from a distance.
The makeshift climbing rope twined his waist
as he shook the canisters like holy censers
above the traffic. He was laughing, and shouting
up to his buddy on the bridge when he lost
his footing, the rope spiraling around his right leg,
like a vine.  Overturned and free and spinning in the open
air, he saw me then, and waved.  And closed his eyes,
silent over the L.A. River as if surrendering to the memory
of water, to a dream where gravity is no issue,
and the possibility of death, an initiation.

6.
I should have started with this. With the photo
the barista snapped from the car on his way
to the café on a Tuesday morning. I should have said
that what we can see from traffic never happens
unless someone writes it down. That I’ve searched
the news for hours and found nothing. That
when you are young and brown and hanged
over a bridge on the 110, your neck
broken, your head titled low and to the side,
your hands bound behind your back and dripping
red—and people wonder what you did or didn’t do
or said, and whose you were and what rite—I am
standing here, with the only ink I have: scratching
at my skin, my arms outstretched to the wind—
and all I can think is that the timbre
that unbinds murder
from the memory of a man
may be—a single voice. 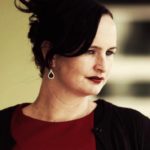 Sherre Vernon believes in the mystical power of words.  She is the author of Green Ink Wings, a postmodern novella, and The Name is Perilous, a poetry chapbook. Her poetry has been published in various journals including The Pedestal Magazine and Eclipse. Sherre’s work is heartbreaking, richly layered and lyrical.