The frog’s bloated belly faces the Carolina sun. If he were human, we would worry about melanoma. We would slather him with SPF-50; we would dress him in an REI sun shirt and add a tiny green safari hat to compliment his funky-pond coloring. But the frog is not human. The frog is a frog, and he is belly-up and swollen, legs splayed as if he’d been caught in the aftermath of a frat party. If he were simply a dead frog in the wild, we would walk on; maybe we’d make some off-color comment—Looks like appetizers tonight! But the frog has chosen to die at the end of an industrial discharge pipe. My client’s discharge pipe. The water he floats upon smells like nail polish.

My stepson is a boy but he is not so young; he’s no longer a minor but he’s not quite an adult. “Man-Child,” I call him. MC for short, which drives him a bit cuckoo. Like the frog, MC is also prone to showing his bare, ribby chest to the sunshine, if only to try and shock you with his 18th birthday present to himself—silver-ringed nipple piercings and a single, purple-shadowed eyeball tattooed on his right bicep.

I’m an environmental engineer, and I’m at a site in South Carolina trying to figure out why the groundwater here is so intensely polluted, why we find globules of blackish goop when holes are dug or wells are bailed, and how we can clean all of this up. My client is here too—he’s an attorney, more used to reading about contaminated sites than smelling them. So far the problem here has been underground. Unseen. No trace to the public or the factory workers. No visible problem unless we dig or bail or poke the ground surface. But now, the frog.

It’s fair to say that by the time I arrive on the scene, MC smokes pot daily. My husband, Karl, has a knack for sniffing out MC and his suburban, gang-lite friends. A verbal frisk by Karl can turn up the evidence or, at the least, an admission of guilt. All of this is lost on me, even though the data are in plain sight—boys giggling at seemingly nothing, followed by sudden, vicious attacks on our Snyder’s® pretzel tub. I assume they are just funny, hungry, typical boys, but then Karl points out their lazy eyes and the hint of burnt sage in the air.

The frog’s eyes are below waterline. If he could still see, he’d be looking up a dark tube of corrugated metal. He would not be able to see very far. The pipe peeks out from the concrete footer of an enormous 100,000 square foot building and quickly disappears beneath it. This pipe connects to another pipe, which branches and subdivides, spaghettiing under acres of building and soil. The frog, if he could still hop, would be able to hop for days upon days under there.

MC becomes uncontrollable. Late nights, no-shows for dinners, and something that reminds me of my own teenage weekends—cheap vodka breath.  Community college transcripts go missing. Evidence of community college is missing too—no textbooks, no Trapper Keepers®, no mention of final exams. Evidence of multiple girlfriends, all with names beginning with the letter ‘A,’ parades through our living room. Condom indentations appear inside of MC’s wallet. Our neighbor’s daughter confides that she lost her virginity to MC underneath our pool table. More and more permanent-inked evidence stacks up on MC’s arms, back, and legs—a vine of roses with a dozen thorns, a pair of casino dice, Chinese symbols, a simple phrase: ‘this is my stupid $25 tattoo.’ MC is chain smoking. MC is chain fucking. MC is an open book and no one, including me, is reading him.

A local hydrogeologist dons a nitrile glove and picks up the frog. The nail polish smell turns septic. It’s hard not to step back. Stepping back is instinctual. Nail technicians wear respiratory protection—shouldn’t we? I stay put, try not to look alarmed or too girly. The frog has button eyes—a tiny black bead lodged in the middle of each eye socket like a quick stitch.

“Put the frog back,” the attorney says.

The hydrogeologist holds the frog under its front legs; its sun-bubbled belly suspends in front of us like a spherical kite. “But shouldn’t we have it tested?”

The attorney shakes his head. “Not a good idea.”

I think about O.J. Simpson and the glove, that famous trial’s lesson of never asking a question if you don’t already know the answer.

The hydrogeologist places the frog back in a water trickle, belly down.

A tiny current pulses the frog downstream until it lodges in a nook just north of the discharge pipe.

MC hands me a Post-it® note. It’s a quote from Buddha on resilience.

MC taps the Post-it® note. “My mom got this on a card during the divorce. I’m having it tattooed across my chest.”

I read the quote. It talks about love and living gently and letting go of things that aren’t meant for you.

“It’s nice,” I say. “It also has three grammatical errors.”

For a second, I see a glimpse of the boy he likely was before I knew him, before he became the MC—eager, charming, clear-eyed. Pain free. I consider helping him edit his mother’s Hallmark divorce card with three co-conspiratorial swipes of my pen. I played a role in that divorce; I caused pain. Could I fix at least some of this for MC? Should I? Or would that be abetting an obsession that’s rapidly contaminating his baby-white skin? The rules of step parenting are not always so clear.

If the frog were still alive, it could round the bend and follow the stream of water from the corrugated pipe to a ditch, and from that ditch to a bigger ditch, and from the bigger ditch to a fertile swamp—which I’m sure he would love, probably flourish within—and from swamp to creek, creek to river, river to ocean, which is how the water flows. Everything is upstream from something else.

The charade of college is gone. MC is missing all of the time now. He’s crashing at his friend Chris’s house (even I can smell the pot on Chris) and only comes around if it’s a holiday or if he’s short on cash. MC’s eyes are filled with red spider veins; he splashes them with Visine® but the red stays put. Karl buys MC a leather tool belt for his latest new job—HVAC repairman. They both seem happy about the purchase, but when I see the way the leather sags on MC’s skinny hipbones, I feel the unspoken weight of it.

I think about all of it: the frog, the nail polish smell, the discharge pipe. I think about coincidences, showing up at the factory on the same day that frog decided to die and daylight right in front of us. I think about cause and effect. I think about my woeful lack of frog biology. I think about black groundwater globules seeping into surface water ditches. I think about tadpoles shaped like jellybeans. I think about—how not for the frog—I would have kept on thinking about what was going on underground, how I’d have missed the huge issue closest to the surface.

We are Christmas shopping when Karl gets the phone call. It’s a jumble of almost-facts—Break-in. Felony. Christian Academy. Vandalism. Jail. More phone calls.

And here it is, the truth. No one wants to take in MC. Not the mother. Not us. Not drug-pal Chris. The decision is made to pack some of his clothes and toiletries in a Hefty® Lawn and Leaf bag, to leave MC outside of the courthouse with his Hefty® bag after the arraignment.

The Carolina Yacht Club is, as you might expect, fancy. White tablecloths. Men who look like English butlers. Lots of navy blazers with brass buttons. There are more utensils in front of me than I understand how to use. The menu is a heavy, leather-bound affair with a font that is über-serif, so it takes some concentration to interpret. Carolina frog legs are on the appetizer list. I’m sure we all see it, but no one mentions it. We mention water testing. Pipe cameras. We will fix the problem with ditch diversion and new, double-walled pipes. We will not talk about the frog.

MC tried to hide from the police dogs, but they’d found him, chewed him up a few hundred stitches worth. There was surgery prior to the arraignment. The Hefty® bag stayed in the car; MC went home with his mother. We try to fix him with outpatient rehab—12-steps, self-love, family days where we pass around an orange hula-hoop—mother to father to stepmother to MC—a chainmail of support, a please-don’t-be-too-late offering that claps against each of our waists, our hipbones, our ankles. I should have seen this, I should have seen this, I should have seen this, I think, with each bump of the hula-hoop. But we did see some of this. The puzzle pieces were mostly there. Wasn’t it normal for teenagers to drink and fuck and smoke? In isolation, each piece hadn’t seemed like that huge a deal. I show up to family days, a stepparent failure in a room with a folding-chair circle of human failures, certain that I do not know how to fix him.

Environmental cleanups take time. Patience. We engineer a solution, or at least the best solution we can imagine. We construct it, and we wait. Over time, we monitor the results. Verify improvement. Modify solutions if systems don’t perform as expected. But mostly, we wait. In Carolina, once we disconnect the old pipes and install new, better pipes, we collect water samples in tiny glass vials, send them to analytical laboratories, and hope for the best. It’s obviously too late for our frog, but maybe there is still time for his brothers and sisters. Or, possibly, he had children. Perhaps now that our downgradient swamp water is turning mirror-clear, those baby frogs can drink it through their skin without fear of mutation. I imagine their button eyes reflecting a gentle, warming sun, while we wait for quarterly lab analyses to determine their true fate. I picture cattail fronds swaying over their backs—miniature beach umbrellas attempting to protect them from harm.

If I could engineer a solution for MC, his eyes would be clear again, the same blue as his great-grandmother’s china. The cleaned-up version of MC flashes his nipples at me because he is goofy like that, and I can see where the holes of his piercings once were, but the silver hoops are gone. The skin on his re-designed chest is pale and inkless. MC points down to the ground and I can see it—all of his tattoos have spilled onto the dirt. The rose vines and Chinese symbols and the purple-shadowed eyeball are scattered around us, covering each of his fifteen AA one-month medallions. Random words carved into his body that had never made good sense are now broken into individual letters at our feet; only the word ‘stupid’ remains intact, staring right back at me. 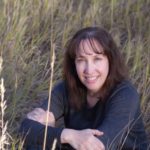 Michele Finn Johnson’s work has appeared in Colorado Review, Mid-American Review, DIAGRAM, The Adroit Journal, SmokeLong Quarterly, and elsewhere. Her work has been nominated several times for a Pushcart Prize, Best of the Net, and Best Small Fictions. Michele lives in Tucson and serves as assistant fiction editor at Split Lip Magazine. Find out more online at www.michelefinnjohnson.com and @m_finn_johnson.